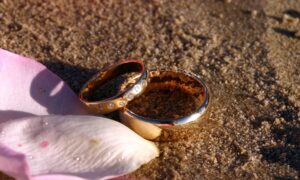 Rules of Engagement: How to NOT Fight With Your Fiance About Money
0
Share Now
TelegramFacebookTweetEmailTellMeWeReddit
Copy Link
Advice

Here is a story from an experience I had some time ago.

Before meeting with a new customer I was told that “this guy is pretty cynical and will only give you a few minutes.” Understandably apprehensive, I asked the customer, “How did you get started in this business?” He related the story of his first day on a shipyard in Scotland.

He was very young and scared to death. They issued him a “tin cup” for his tea break, and he observed others attaching the cup to a metal pole and holding it over hot coals. A man walked up and said, “Need help, boy?” and proceeded to put the lad’s cup on top of the coals. The boy’s eyes widened as he saw his cup disappear in the flames.

“From that point on, I knew I had to take care of myself,” the customer said.

What an opportunity! By asking a simple question around a childhood incident, we gained valuable insight into this man’s background and established the foundation for our relationship by listening. He became a valued customer.

By becoming genuinely interested in others, you can gain more friends in a week than you can in a year of trying to get others interested in you. The value of this experience lies in the discipline of listening first–then giving information.

For technically trained people, this is unnatural. We build our technical reputations on telling—or giving information. For most of us, listening first is a paradigm shift.

You may not have the luxury of establishing this in-depth relationship with every person, but you can connect with others at a higher level. The impact this has on others filters to your valued customers (internal and external).

High IQ and technical expertise can have a paradoxical effect among seemingly promising people who fail.

Here is another story. A young engineer who had earned straight A’s in school came to work at an environmental engineering firm but was fired within a short period of time.

The reason? “He was brilliant at work,” his manager told me. “But he couldn’t take direction.”

His supervisor would tell him how to do a design, and he’d do it his own way. When his supervisor pointed out how the design didn’t conform to the specifications, he got defensive. He couldn’t take feedback, and acted as though it were a personal attack.

“When other engineers would ask him for help, he’d turn them down, saying he was too busy with his own part of the project. He created so much animosity that when he needed some help, no one wanted to give it to him,” the manager said.

High IQ and technical expertise can have a paradoxical effect among seemingly promising people who fail. In a study of once-successful managers who failed, most were technically brilliant, and their technical skills were often the very reason they were promoted into management in the first place.

But once they reached higher positions, their technical strength became a liability. Arrogance led some to offend their peers by acting superior, others to micromanage subordinates, even those with better technical expertise.

In our technically, electronically focused world, actual human contact occurs less and less. This leads to a lack of simple, but powerful, skills of collaboration and connecting with others.

Paradoxically, there are those who call these human skills “soft.” Nothing could be further from the truth. Effectively dealing with others is often quite hard.

Differentiating yourself by enhancing your human relations skills gives you a competitive advantage. It’s worth the effort and can pay big dividends in business results.