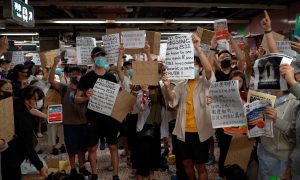 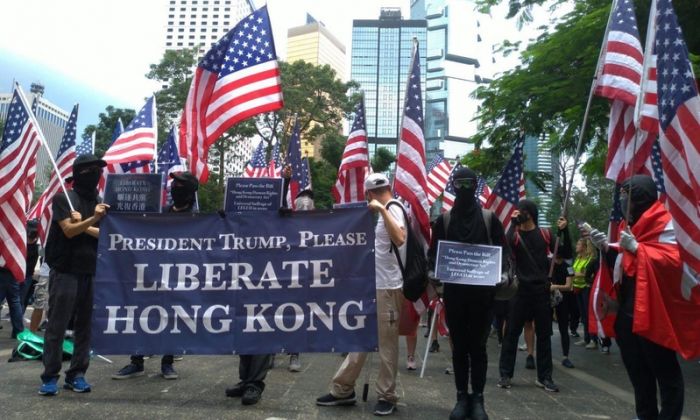 Growing Frustrated Over Beijing Interference and Police Violence, Hong Kong Protesters Call on US for Support

The 14th consecutive weekend of protests in Hong Kong was marked by an appeal to the U.S. government to pass legislation in support of the city’s autonomy, and calls for the police to be held accountable for making violent arrests last weekend.

Mass demonstrations since June were initially over a controversial extradition bill that would allow people to be transferred to mainland China for trial but has since morphed into wider calls for democracy and an independent investigation into police use of force.

Despite Hong Kong leader Carrie Lam last week conceding to the protesters’ demand for the bill to be formally withdrawn, Hongkongers turned out in the thousands this weekend to call for their other demands to be fulfilled.

“President Trump, Please Liberate Hong Kong,” read one banner. The rally called for U.S. lawmakers to pass the Hong Kong Human Rights and Democracy Act, which would require the Secretary of State to certify annually that the city is sufficiently autonomous from mainland China to justify the special treatment currently afforded to it.

Despite Hong Kong’s handover from British to Chinese rule in 1997, the United States has dealt with Hong Kong as a separate entity distinct from the mainland in matters of economics and trade. For example, Hong Kong doesn’t face the tariffs that the United States is currently imposing on Chinese imports.

The legislation also mandates that officials in China and Hong Kong who have undermined the city’s autonomy are vulnerable to sanctions.

A growing number of U.S. officials have said they are committed to passing the U.S. bill, first introduced in June. Congress returns to work after a recess next week.

Protesters urged the United States to pass the bill in full. “We have the same values of freedom and democracy as the United States,” David Wong, a 30-year-old banker, told Epoch Times reporters at Chater Garden. “The United States is a democratic country, and Trump is elected by the people. We want to have the same system here.” Hong Kong’s leader is currently voted in by an electoral committee comprising of mostly pro-Beijing elites. Candidates for office are also hand-picked by Beijing.

64-year-old Felix Wu told The Epoch Times that he would continue protesting if the government does not respond to all their demands. “Our protest became a regular task, just like going to work.”

At around 2 p.m. local time, protesters began marching to the U.S. consulate. Some delivered petitions to a U.S. consulate staff who received them.

As protesters continually flooded the area around Chater Garden and the U.S. consulate, they spilled over to the nearby districts of Central, Admiralty, Wan Chai, and Causeway Bay upon completing the march.

At one point, protesters who gathered at Hong Kong Park—located roughly 1,100 feet from the consulate—began pointing laser pens at police who stood by, expressing displeasure at the police’s use of force during demonstrations.

Police warned that they would fire tear gas, holding up a black warning flag. But they did not fire.

Though organizers applied for the rally to end at 6:30 p.m., they announced that the event would end earlier due to heavy crowds and the growing police presence.

The organizers asked people to disperse and avoid taking the train at the Central train station as riot police began arriving, but many refused to leave the premises.

Hundreds of riot police eventually arrived. Three Hongkongers who remained inside the station were arrested.

A lady surnamed Fung told The Epoch Times that one of the arrested is her 54-year-old father. “He didn’t do anything but still got arrested,” Ms. Fung complained.

Around 5 p.m., more police began arriving at nearby Admiralty Station, Hong Kong Station, and others, where many protesters remained.

After 6 p.m., police began arresting those who refused to leave.

At around 7 p.m., police fired tear gas to disperse protesters on several busy thoroughfares, causing many passersby to be exposed to tear gas.