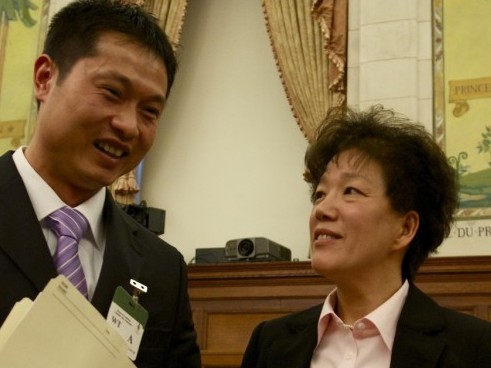 OTTAWA—David Chen’s Lucky Moose grocery store in Toronto isn’t a monolith of the grocery business, but his influence has reached the highest levels of the Canadian government.

Chen appeared before Parliament’s Standing Committee on Justice and Human Rights on Tuesday to outline the struggle he faced when his efforts to catch a shoplifter turned him into a kidnapper.

The committee is reviewing Bill C-26, which would amend the criminal code to open up and simplify provisions for citizen’s arrest.

Chi-Kun Shi, a lawyer who has lobbied for amendments to the law, told the committee the changes would eliminate some of the restrictions that make current citizen’s arrest laws unworkable, but said the bill could go even further.

Those restrictions, namely the requirement that a citizen’s arrest be made while a crime is in progress, are why Chen’s arrest of a serial shoplifter at his store resulted in him getting charged with assault and forcible confinement.

Chen arrested the shoplifter an hour after the theft.

“Under the criminal code, even with this proposed amendment, the stakes are very high for store owners who exercise their right to citizen’s arrest. The benefits, on the other hand, are quite limited,” said Shi.

That’s because the penalties for an improper citizen’s arrest are much more severe than those for shoplifting, she said, telling the committee the story of one owner who waited fearfully for police to show up after arresting a shoplifter, who wasn’t as concerned.

She said during her ongoing debates over the issue of citizen’s arrest, she frequently hears opponents argue that victims should call the police and wait.

But Shi said police simply don’t have the resources to deal with current levels of property crime.

“So what these opponents are really saying to the store owners is ‘suck it up.’ And store owners who try to do anything else to protect their properties are ‘taking the law into their own hands’ or ‘committing vigilante justice.'”

Before Chen’s arrest, the law was in the shoplifter’s hands, she said.

Shi has argued consistently that the issue strikes at the heart of Canadian values regarding how citizens relate with their government. She believes that relationship should be one of equals working together, rather than the paternalistic attitude the government now seems to carry.

Chen told the committee of his daily struggle with shoplifters, with police often too busy to show up. It was the kind of situation that drove him to make his own arrest, and be arrested in turn, detained overnight with his wife denied permission to visit.

Chen and two employees were acquitted of assault and forcible confinement in October 2010 after arresting a 52-year-old drug addict in May 2009.

“Almost every day, people steal from my store. Calling the police does not stop them. They are gone before the police get there. Sometimes the police don’t have time to come,” Chen told the committee.

The trio tied the shoplifter and kept him in a van until police came. “I was told I may be a bigger criminal than the shoplifter,” he said.

“I was very lucky many Canadians supported me; the community raised funds to pay my lawyers. My lawyers worked hard and gave me good discounts and the court set me free.”

“We just want to protect our family, our property, and ourselves,” said Chen, who thanked the government for keeping him in mind as they looked at the issue. He said the new bill was a needed change.

The committee seemed inclined toward Chen’s case, though concerns remain over provisions in the bill—particularly what obligations private security firms, which make the vast majority of citizen’s arrests, have under the Charter of Rights and Freedoms as far as advising criminals of their rights, and other provisions.