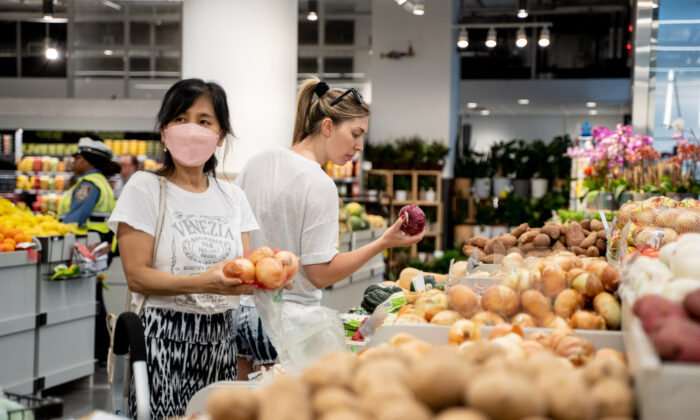 The average price of U.S. groceries has skyrocketed due to high inflation and shortages among the top ten key food items over the last 12 months up to May 2022, according to a June 28 sales report from NielsenIQ.

American consumers are feeling the pain and are increasingly spending more of their income on many basic groceries, as prices “are exceeding these inflationary measures“​ said the report.

“The effects of high and sustained inflation are much more pernicious than unemployment in the sense that high prices affect more people,” noted Mark Hamrick, Bankrate’s Senior Economic Analyst.

“The cost of basics is increasingly out of reach for many.”

Inflation is costing the average American $460 more per month, according to Ryan Sweet, Senior Director of Economic Research at Moody’s Analytics.

The U.S. Bureau of Labor Statistics’ (BLS) Consumer Price Index (CPI) from June 10, which covers the change in prices paid by consumers for goods and services, rose a record 8.6 percent in the last 12 months through June, the largest price increase since November 1981.

Food store prices were up 0.7 percent for May from April, up 7.4 percent from the same month last year.

Peak Inflation Yet to Hit

The CPI grew a total of 1 percent from April, a serious indicator that peak inflation has yet to reach the United States.

The average price of popular meat items rose by double digits, with the price of pork following a similar path as beef and chicken, up 12.1 percent to an average unit price of $3.33.

“Meat manufacturers like Tyson Foods attribute soaring costs to a combination of stronger consumer demand, increased fuel and labor costs, and the rising cost of feed for farmed animals,” said the report.

Nielsen reported the average unit price of milk rose to record highs since March, up 8 percent during the last 12 months ending in May and nearly a dollar more than it did two years ago, according to Bankrate.

The CPI index for dairy and related products in total rose 11.8 percent, the largest annual increase since April 2008.

The price of eggs hit nearly 20 percent during the same period due to an outbreak of bird flu, according to Nielsen, while Bankrate said a carton of eggs was up almost $1.50.

Pain at the Pump

Meanwhile, gas prices in June hit the highest price per gallon on record, which had been climbing since last year, up 49.5 percent.

The average price of a gallon of unleaded gasoline in January was $3.41, almost a dollar more than it was in February 2020, according to the BLS.

While the Biden administration has pointed to Russia for the rise in fuel prices, the conflict in Ukraine is only responsible for adding an extra 15 percent to oil prices, according to the U.S. Energy Information Administration.

The mysterious destruction of several large poultry farms over the last several months has not been mentioned in the report.

Despite the rise in the overall cost of food over that period, unit sales of each of these top-selling grocery categories posted declines of between 2-7 percent, except for chocolate, which posted a 1.2 percent increase, and toilet paper, which increased 4.6 percent.

According to a Food Industry Association, FMI report, more consumers are trending toward store brands, with 41 percent of shoppers increasingly buying more store label products, with 77 percent planning to purchase items under those labels in the future,

As long as inflation trends continue, the report expects consumers to spend more on groceries while decreasing expenditures on other out-of-home spending.

Summers and his colleagues criticized the changes to the way the government has measured inflation in the CPI index since the late 1970s, which may have led the Federal Reserve to understate the current scope of the problem, thus strongly affecting inflation rate policy decisions.

In 1983, the Bureau of Labor Statistics removed homeownership costs from CPI measurements and replaced them with a metric called owners’ equivalent rent, but this may have skewed the analysis on the direct effect of mortgage rates and thus interest rate policy, on calculating the rate of inflation.

The paper also added that the CPI consists of less volatilely priced goods compared to previous decades such as food and clothing, while more segments in the index come from sectors of the economy such as electronics, which are less sensitive to sudden price shifts.

Summers concluded that bringing down inflation will now require a longer and more sustained effort and that it will not happen soon or easily.

He suggested that interest rates may have to be raised to levels not seen since the Paul Volcker era of the Fed from 1979 to 1987 when interest rates rose as high as 20 percent before inflation was under control, which many say would cause a major recession and hardship for millions of Americans.