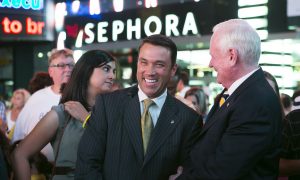 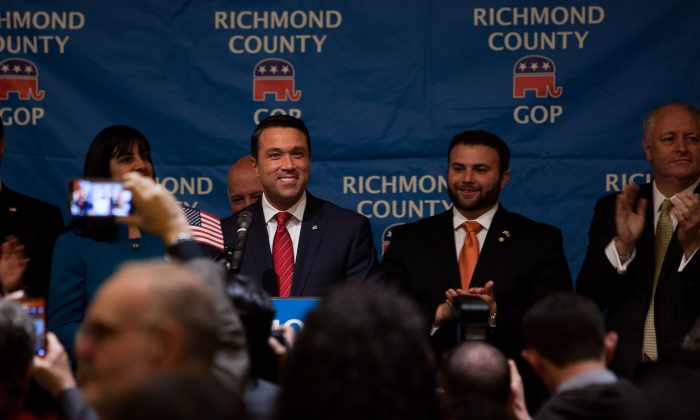 NEW YORK—Incumbent Congressman Michael Grimm defeated his Democratic challenger Dominic Recchia on Tuesday, rising from the ashes after he was left for dead by national Republicans following his 20-count federal indictment in April.

Antonella Tomassi was convinced by Grimm’s helping Staten Islanders after Hurricane Sandy two years ago. “He was the only politician you found down on the beach,” she said. “He was in the water. And he’s always in the neighborhoods.”

Grimm resigned from his seat in the House Committee of Financial Services, his campaign manager left him, and the Republican establishment refused to back his reelection campaign with funds. The National Republican Party abandoned him, and NY1 reported that nobody from the organization attended Grimm’s victory party.

Democrats pounced on the opportunity, funneling millions into attack ads on television that reiterated Grimm’s federal indictment over and over. In total, Grimm was outspent more than 7 to 1 by the Recchia campaign and various Democratic political action committees, according to the left-leaning House Majority PAC.

But the former marine and FBI agent marched on, adopting more grassroots tactics and eschewing big events. In the first poll of the race released mid-September, Grimm was up 4 points against Recchia, 44 to 40.

Then the debates started, and all Grimm had to do was keep calm and wait for his gaffe-prone opponent’s strategy to backfire. Grimm’s jabs at Recchia’s liberal voting record as council member repeatedly provoked the latter to bluster about Grimm’s criminality.

Recchia’s lackluster performance on camera seemed to confirm many Staten Islanders’ worst suspicions of Recchia; that he was a substance-free opportunist who had little to bring to Staten Island, and used Grimm’s indictment as a crutch.

After two televised debates, Grimm gained momentum and was up 19 points.

“It’s not how hard you can hit, it’s how hard you can get hit and keep moving forward. And that’s how wining is done,” Grimm quoted one of the “Rocky” movies to an explosive applause at his election party. “We showed them that is how winning is done.”

But Grimm isn’t in the clear yet. His trial is set for February.