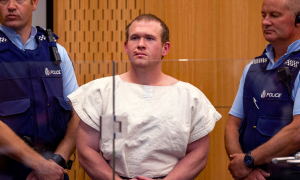 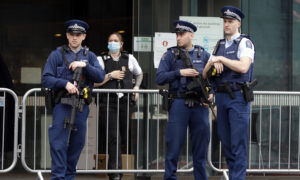 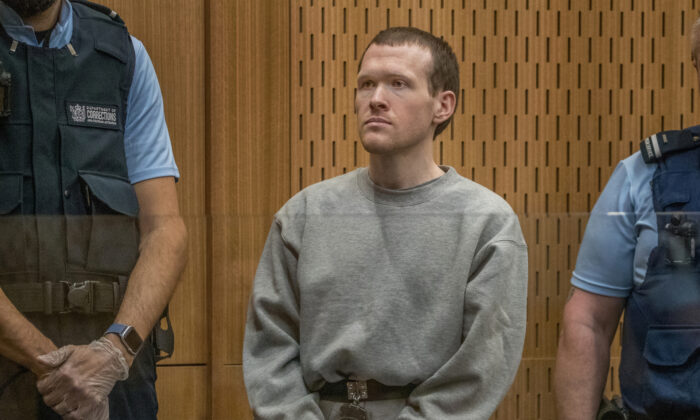 Brenton Tarrant is seen during his sentencing at the High Court in Christchurch, New Zealand, on Aug. 24, 2020. (John Kirk-Anderson/Pool via Reuters)
Asia & Pacific

WELLINGTON—Families of victims gunned down at two New Zealand mosques urged a judge to impose the toughest possible sentence, life without parole, on the gunman as he showed no remorse and appeared to smirk at one survivor during a sentencing hearing on Tuesday.

Mirwais Waziri, who was wounded during the 2019 attack at Christchurch’s Al Noor mosque, put aside his prepared court statement and addressed white supremacist Brenton Tarrant directly, after seeing that he did not have “any regrets, any shame in his eyes.”

“He does not regret anything,” said Waziri in the High Court in Christchurch on day 2 of the sentencing hearings.

“Today you are called terrorist and you proved to the world that us Muslims are not terrorists. I say to the people of New Zealand that terrorists do not have religion, race, and color,” said Waziri, whose words drew applause from the public gallery.

Nathan Smith, originally from Britain and a survivor of the Al Noor mosque shooting, also spoke directly to Tarrant who sat in gray prison clothes cornered by guards.

“When you get a free minute, which you will have plenty of. Funny, eh? Very funny. Maybe you should try to read the Koran. It’s beautiful,” he said, reacting to Tarrant’s apparent smirk.

Tarrant, a 29-year-old Australian, is scheduled to be sentenced this week after pleading guilty to 51 murders, 40 attempted murders, and one charge of committing a terrorist act during the 2019 shooting rampage in the city of Christchurch which he live-streamed on Facebook.

Prosecutors have told the court Tarrant carefully planned the attacks to cause maximum carnage by accumulating high-powered firearms and ammunition, training at rifle clubs, and studying mosque layouts.

A murder conviction carries a mandatory sentence of life in prison. The judge can impose a life term without parole, a sentence that has never been used in New Zealand.

Farisha Razak said in a recorded message that Tarrant did not deserve any leniency after killing her father, Ashraf Ali, who was visiting New Zealand from Fiji.

“You made a game out of people’s lives,” said Razak.

“You should not even be granted parole—ever.”

“I know in New Zealand law they have removed the death penalty for humans, but unfortunately he’s not a human,” Darwish said.

The second day of a multi-day sentencing hearing was dedicated to allowing survivors and family members of victims to address the court, in person and via video.

Tarrant, who is representing himself, will be allowed to speak at some point during the hearings, although Judge Cameron Mander has powers to ensure the High Court is not used as a platform for extremist ideology.

While most of Tarrant’s victims were at Al Noor mosque, he killed seven people at the Linwood mosque, before being detained en route to a third.

The daughter of a woman killed in the Linwood mosque challenged Tarrant to use his life in prison to consider the beauty of the diversity and freedom he sought to destroy.

“While I have pity for your mum, I have no emotion for you. You are nothing,” said Angela Armstrong, daughter of 65-year-old victim Linda Armstrong.

“While he will remain trapped in a cage my mum is free. I, therefore, challenge Tarrant to use his remaining lifetime to consider the beauty and life to be found in diversity and freedom that he sought to distort and destroy.”

Kyron Gosse, nephew of Linda Armstrong, said the shooter had come to New Zealand as a guest, and used that privilege to destroy a family that had lived here for seven generations.

“Filled with his own racist agenda this coward hid behind his big powerful guns and shot little old Linda from afar,” said Gosse.

Live reporting from the courtroom was banned, and other restrictions were put in place on what the media could report.

The hearings were adjourned until Wednesday morning.

By Praveen Menon and Jonathan Barrett