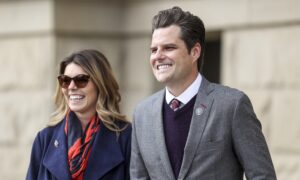 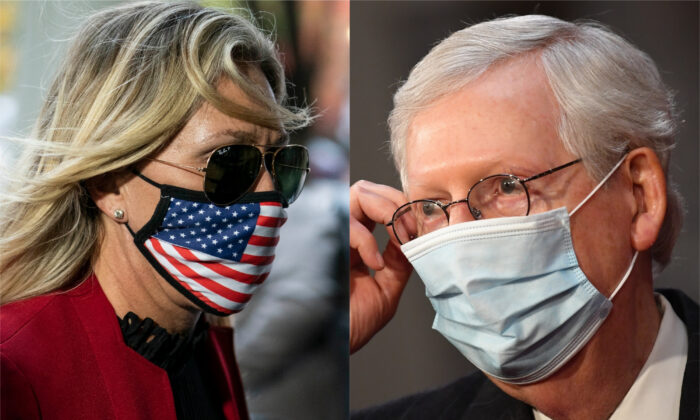 The top Republican in Congress on Monday clashed with a first-term lawmaker, in a sign of the growing split inside the party.

Senate Minority Leader Mitch McConnell (R-Ky.) in a statement to news outlets said that “loony lies and conspiracy theories are cancer for the Republican Party and our country.”

“Somebody who’s suggested that perhaps no airplane hit the Pentagon on 9/11, that horrifying school shootings were pre-staged, and that the Clintons crashed JFK Jr.’s airplane is not living in reality,” he added. “This has nothing to do with the challenges facing American families or the robust debates on substance that can strengthen our party.”

Rep. Marjorie Taylor Greene (R-Ga.) has in the past speculated that the Sept. 11, 2001, terror attacks were a false flag, among other theories.

Greene responded on Twitter, writing: “The real cancer for the Republican Party is weak Republicans who only know how to lose gracefully. This is why we are losing our country.”

Greene also referenced the calls from media outlets and lawmakers for her to be removed from committee assignments, dubbing herself the “greatest threat” to Democrats and “activist media” and saying she was stepping up following former President Donald Trump leaving office.

“They hate me because I represent your America First views. They think Trump is gone, so they attack you and me. He’s not gone. And we won’t back down and we will never give up! We REFUSE to be canceled!” she added.

Democrats in Congress are pressuring House Minority Leader Kevin McCarthy (R-Calif.) to take action against Greene. McCarthy hasn’t addressed the matter publicly but reportedly plans to meet with her this week.

Media outlets and opponents consistently label Greene as a supporter of QAnon, a movement that includes theories that some of the most powerful people in the world have engaged in child sex trafficking, abuse, and cannibalism. They don’t use the same labeling against Democrats who promoted unfounded theories of collusion between Trump and Russia.

One recently launched political action committee seeks to oust the Republican who backed Trump’s impeachment, while another is aimed at opposing Republicans who support the former president.

Some prominent conservatives stood by Cheney, including McConnell and McCarthy, who has so far resisted attempts to remove former Vice President Dick Cheney’s daughter from her leadership post.

Greene said in an interview released Monday that she plans to meet with Trump at his Mar-a-Lago resort soon.

“I’m excited to go visit him soon and continue to give him a call and talk to him frequently. Great news is, he supports me 100 percent, and I’ve always supported him,” she told One American News. “President Trump is always here for the people, and he’s not going anywhere. So I look forward to joining him and what his future plans may be.”

Greene said over the weekend that she spoke with Trump over the phone and that he supports her. Trump’s office hasn’t responded to requests for comment on the matter.