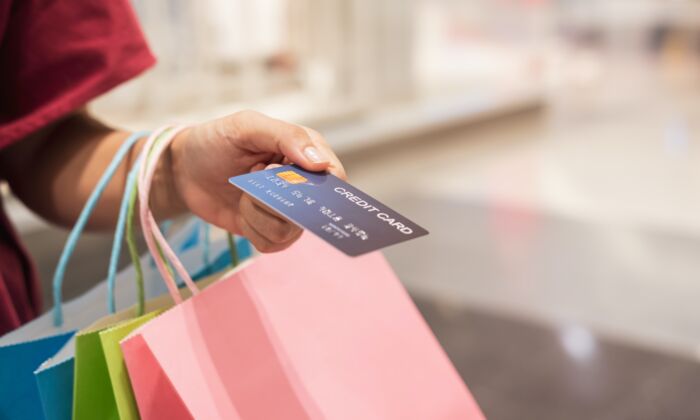 For some shoppers, buying green products is about enhanced social appeal. (kitzcorner/Shutterstock)
By Autumn Spredemann

American consumers are reaching for “green” products on shelves more than ever this year while corporations are cashing in on a gold mine. Though evidence suggests that the trend has little to do with helping the environment.

The market for sustainable products and energy was valued at more than $15 billion in 2022. Analysts forecast that number will hit $79 billion by 2030.

However, the eco-awareness movement is little more than a green veneer for some companies. Due to lax regulations, all businesses need is a label brandishing familiar buzzwords such as sustainable, biodegradable, or natural. Then the product—regardless of its actual eco-impact—is unleashed on consumers.

The industry term is “greenwashing,” and dozens of companies have already been exposed for peddling items and services that are anything but eco-friendly.

Yet the duplicity applies to more than just businesses. Research shows that many advocates on the consumer end care more about the social appeal and acceptance of going “green” than the environment itself.

One study on the psychological impact of using “green” products showed that items that consumers believed to have a reduced carbon footprint led to a spike in perceived value to society. The study authors referred to it as the “green consumption effect.”

But only a handful of the people who expressed that heightened sensation of social value actually buys “green” products.

A survey showed that of the 62 percent of people who say they want more “green” options, only 26 percent actually purchase them.

And while the percentage of people who claim they want more sustainable products—and are willing to pay more money for them—has been growing since 2019, a serious intention-action gap remains.

Some green industry insiders say consumers do little research on alleged eco-friendly products before purchasing them. This contributes to the trend of greenwashing, which analysts say isn’t likely to go away anytime soon.

“The survey results aren’t surprising. It has long been acknowledged that a significant portion of consumers makes purchasing decisions based on the perceived societal value of a product,” Carlos Cen Wu told The Epoch Times.

Wu is the CEO and co-founder of Tallo, a company that offers sustainable personal care products. He says Tallo was born out of frustration with standard industry practices, confusing labels, and harmful ingredients.

Wu said for someone to make a lasting, positive impact on their carbon footprint, it “requires a comprehensive examination of one’s consumption habits and a steadfast commitment to reducing one’s environmental impact.”

He offered the example of people who opt to replace all their plastic items with alternatives because it’s “greener.” But what happens to all that plastic? Wu says some people overlook the possibility of reusing their plastic in favor of buying all-new “green” replacements.

“This behavior may be seen as a way to signal their values to others rather than truly reducing their environmental impact,” he said.

Wu noted that a more effective approach would be to use whatever someone has as much as possible, then replace items with a more sustainable choice as the need arises.

Because for anything to be truly sustainable, the entire lifecycle of an item must be considered. It’s called a life cycle assessment, or LCA, within the industry, which uses a benchmark product and a complete examination of the item in question—from the design desk to the rubbish bin—to determine sustainability.

But many companies don’t take it that far. Instead, they focus on a single attribute of their product. For instance, does it contain any recycled materials? If so, it can be labeled “green,” regardless of how it came into being or what happens after being in the trash.

In 2022, 18 household names got called out for similar types of “greenwashing.”

At the end of the day, consumers still need to put in the work to support companies that offer truly eco-friendly products.

Though it appears many advocates aren’t walking the talk. One 2022 analysis revealed that just 52 percent of consumers attempt to learn how companies are managing resources and if they practice ethical sourcing for their products.

For some green industry business owners, this aspect alone is very telling.

“I think a big test of peoples’ ‘green’ intentions is seeing how much they’ve truly evaluated and combed over their life holistically and either made big changes or not,” Lauren Byington told The Epoch Times.

Her company was one of the first to put a spotlight on ethical sourcing for mica, a mineral that has long been associated with forced and child labor in some countries. Mindful of the product lifecycle, Byington also uses recyclable or reusable packaging.

And she maintains that all you need to do to determine someone’s level of commitment to living “green” is to look at their lifestyle.

“What about the rich businessperson or politician who is invested in green-focused companies and constantly advocates for solar [and] wind … but jet-sets weekly, owns multiple massive energy-hungry mansions, [and] wears precious gems, animal-tested cosmetics, and other products that could have been obtained through cruel methods?” she asked rhetorically.

She noted that some clean cosmetics companies may qualify for certain eco-labels, but many of the platforms providing those trusty seals of approval require annual and per-product fees for a product to be entered into a “clean” database.

Supply chain specialist Melanie DiSalvo agrees that consumers don’t put much effort into being as eco-conscious as they’d like to appear.

“If people actually cared about environmental issues, they would focus on reusing what they already have and not wasting,” DiSalvo told The Epoch Times.

Working with more than 200 sustainable fashion startups at her company Virtue + Vice, DiSalvo says a lot of people don’t do real research before buying.

“The average consumer reads a few headlines and then makes the purchase. The problem with a lot of these headlines is that they are from influencers who don’t have any real authority in the space,” she said.

DiSalvo compared it to the old children’s rumor game “telephone.” An influencer hears something from a sustainability expert, makes a few changes, then parrots it back to the media.

“If consumers care about the issues, they should be careful about who they are getting their advice from,” she said.

Byington, Wu, and DiSalvo all believe that the trend of greenwashing will continue until better regulations are in place. As a natural byproduct, purchases based on social appeal likely will also.

Because, as DiSalvo pointed out, environmental awareness has nothing to do with image. It’s about reducing and reusing.

“For example, using an old pasta jar to store dry goods is much more eco than going out and buying all-new mason jars … but then, people wouldn’t get the Instagram photos,” DiSalvo said.