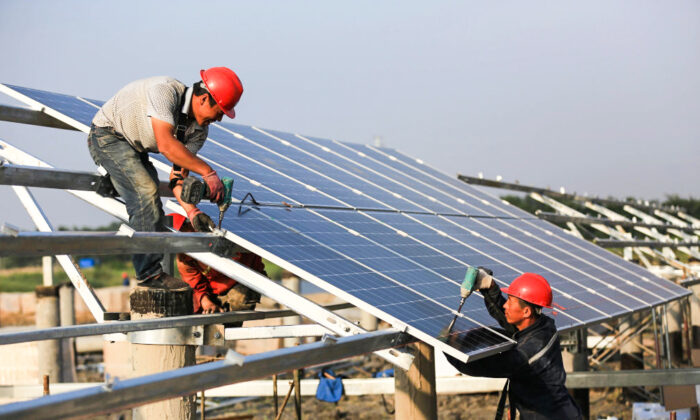 WASHINGTON—Large investment firms are increasingly focusing on sustainable investing that considers environmental, social, and governance (ESG) factors. But while they seek to own shares of environmentally friendly companies, many continue to disregard human rights risks hidden in their investment portfolios, according to an analyst.

There is a “grave risk” that U.S. companies across sectors are benefiting from human rights violations in China, said Allison Gill, forced labor director at the Global Labor Justice International Labor Rights Forum, a human rights organization in Washington.

Speaking at The China Forum, an annual conference hosted by the Victims of Communism Memorial Foundation on Oct. 27, Gill pointed to the solar industry and the apparel and textile sector as being the most exposed to the risk of having Uyghur forced labor in their supply chains.

“That is made perhaps the clearest by the problems that we see in the solar supply chain where you have a lot of investment, including U.S. multinational development bank investment, flowing to green energy solutions, like solar panels, and yet you have this supply chain that is heavily tainted with forced labor goods,” she said.

An investigation by Sheffield Hallam University found that some 45 percent of the world’s supply of polysilicon, a key component of solar panels, comes from Xinjiang, a region where the Chinese regime has detained more than 1 million Uyghurs and members of other Muslim minorities, in a vast campaign of repression that includes the use of forced labor.

An additional 30 percent of the global supply also comes from other parts of China, which also has serious exposure to forced labor, Gill added.

“So that puts the entire solar supply chain at risk,” she said.

To reduce the exposure to China’s forced labor, investors and multinational development banks must “harmonize their ESG requirements,” she said.

Production supply chains in the apparel and textile sector have been the center of attention for a while over the concerns for the use of forced labor, child labor, and human trafficking. China is the world’s third-largest cotton-producing country, behind India and the United States. China’s Xinjiang region produces nearly 85 percent of China’s and 20 percent of the world’s cotton supply.

A report published in December 2020 by the Victims of Communism Memorial Foundation showed that at least 570,000 Uyghurs in 2018 were forced to pick cotton by hand through the Chinese regime’s forced labor training and transfer scheme.

In response to mounting evidence of the use of forced labor in Xinjiang, Washington last year blocked the import of all cotton and tomato products from the region and of silica-based products from a Xinjiang-based firm earlier this year.

Slave labor in Xinjiang is part of “a colonial project” of the Chinese Communist Party (CCP), according to Michael Sobolik, a fellow in Indo-Pacific Studies at the American Foreign Policy Council, a Washington-based nonprofit.

Speaking at The China Forum, he said the use of forced labor in Xinjiang is central to the regime’s Belt and Road Initiative (BRI), adding that that’s the biggest reason why many governments are willing to be silent on this human rights issue.

Since 2013, the CCP has made the BRI a centerpiece of its plan to grow its geopolitical influence by pouring billions of dollars into infrastructure development projects around the world.

The BRI encompasses nearly 140 countries, accounting for 40 percent of the global economy and 63 percent of the world’s population, according to the New York-based think tank Council on Foreign Relations.

China also has been waging a campaign for global influence by winning control of influential international organizations, speakers at the forum said.

Last year, for instance, Beijing sought to lead the World Intellectual Property Organization, a U.N. agency that promotes the protection of intellectual property and copyrights worldwide. Through the diplomatic efforts of the United States, however, member countries approved the U.S.-supported candidate, Daren Tang of Singapore, over China’s nominee, Wang Binying.

Andrew Bremberg, president and CEO of Victims of Communism Memorial Foundation, said that there needs to be a more “coordinated, concerted international diplomatic pressure and effort” to push China to change its behavior on the world stage.

It is “very positive” that the Biden administration has repeatedly emphasized the importance of engaging with international organizations and having a multilateral approach to global affairs, he said at The China Forum.

But Washington needs to do more, he noted, to unite allies against China.

“They need to put their political muscle,” he said, to hold China accountable on “human rights abuses, whether it is in Hong Kong or Xinjiang or with Falun Gong or the organ harvesting.”

Miles Yu, a Chinese-born academic who helped shape the Trump administration’s China policy, sounded the alarm on the CCP’s global ambitions, which include exporting its “model of governance” to other countries and international organizations.

Speaking at the conference, he touted the Trump administration’s tough-on-China policy, calling it a “crowning achievement.”

“We changed the global dialogue on China and placed the China threat on a realistic foundation. That’s a very big deal,” he said.

The Biden administration has repeatedly said that while the United States is in an “intense competition” with China, it seeks to cooperate in areas of common interest, such as climate change.

According to Yu, however, it is “very difficult” to cooperate with China.

“China, really deep inside, does not care nearly as much about the issues like climate change as the United States current government does,” Yu told The Epoch Times.

He cautioned that Beijing would use climate change as “leverage” to extract U.S. concessions on human rights, forced labor, tariffs, espionage, and other substantial issues.

“So, I don’t think climate change is China’s top strategic priority,” he said. “They focus on this radical push for just economic power at any cost, even at the expense of global ecology.”