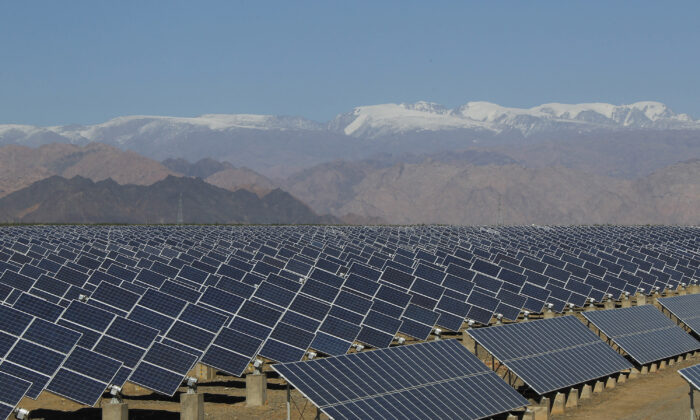 British researchers say the world’s production of solar panels is being fueled by forced labor from Uyghur Muslims in the Chinese province of Xinjiang.

An investigation by Sheffield Hallam University says some 45 percent of the world’s supply of a key component in the panels—polysilicon—comes from Xinjiang and is obtained through a vast system of coercion involving the Uyghur ethnic minority.

In Broad Daylight, the report from the university’s Helena Kennedy Center for International Justice, says the world’s four biggest panel manufacturers use polysilicon tainted by forced labor, and urges producers to source the substance from elsewhere.

It cited an official Chinese government report published in November which documented the “placement” of 2.6 million “minoritized” citizens in jobs in farms and factories in Xinjiang and elsewhere in the country through state-sponsored “surplus labor” and “labor transfer” initiatives.

“The (Chinese) government claims that these programs are in accordance with PRC (People’s Republic of China) law and that workers are engaged voluntarily, in a concerted government-supported effort to alleviate poverty,” the report says.

“However, significant evidence—largely drawn from government and corporate sources—reveals that labor transfers are deployed in the Uyghur Region within an environment of unprecedented coercion, undergirded by the constant threat of re-education and internment.

“Many indigenous workers are unable to refuse or walk away from these jobs, and thus the programs are tantamount to forcible transfer of populations and enslavement.”

The report said the issue was exacerbated by the fact 95 percent of all solar modules relied on solar-grade polysilicon, which is extracted from mined quartz.

It said all polysilicon manufacturers in the Uyghur region had “reported their participation in labor transfer programs and/or are supplied by raw materials companies that have.”

The report’s authors said they had “investigated the entire solar module supply chain from quartz to panel” to better understand the extent to which forced labor in Xinjiang affected international solar panel supply chains, in order to “provide stakeholders with the evidence base upon which to judge risk of exposure to forced labor.”

China has drawn increasing international condemnation over its treatment of Uyghur Muslims, including allegations of mass detentions and human rights abuses including forced labor and the forcible sterilization of women.

In March, the UK, the United States, Canada, and the European Union placed sanctions on Chinese officials deemed to be responsible for human rights abuses in Xinjiang.

UK Foreign Secretary Dominic Raab said the abuse of the Uyghur Muslims in Xinjiang was “one of the worst human rights crises of our time” and the international community “cannot simply look the other way.”