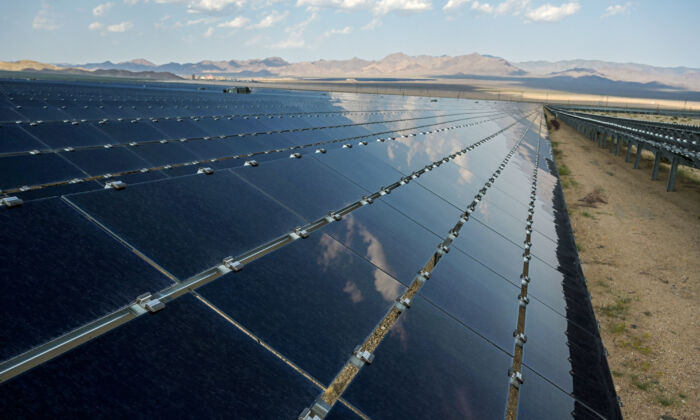 Solar panels are seen at the Desert Stateline project near Nipton, Calif., on Aug. 16, 2021. (Bridget Bennett/Reuters)
US

Tax credits have been a go-to move for the U.S. government to incentivize renewable energy project developers for years. Yet, substantial profits are ending up in the pockets of the corporate banking industry.

As of last year, the renewable tax equity market represented a $20 billion industry for big banks.

Historically, credits for renewable projects have been used to entice new investors to jump on the green energy bandwagon. Yet, because of the lack of practical use on the front end, many entrepreneurs seek tax equity investment partners in exchange for working capital to get projects rolling.

“Similar situation as the movie industry; you need the banks to fund the projects, so they get the tax breaks,” certified public accountant Paul Miller told The Epoch Times.

Energy projects can cost billions of dollars and it’s challenging to develop them without having a financial institution on board, Miller, the managing partner of Miller & Co., explained.

“If you were an investor, you’d benefit from these tax savings, which is why a lot of billionaires are [involved] in these investments,” he said.

When it comes to tax breaks, new companies looking to get into green energy usually don’t owe money when they begin building. So many solar and wind farm companies enter with a clean slate.

That means if the developers want to get any mileage out of the credits the government is offering, a financial third party—generally known as a tax equity partner—is needed.

The majority of these are key players in the corporate banking industry.

Between 2020 and 2021, more than 50 percent of the tax equity market was controlled by two banks: JPMorgan and Bank of America. Other legacy financial institutions with sizeable investments in that market include Wells Fargo, U.S. Bank, and Credit Suisse.

“All tax credits in the United States are geared toward the largest taxpayers. … This is because the tax code contains significant hurdles,” Cherry Tree Group CEO Warren Kirshenbaum told The Epoch Times. Cherry Tree specializes in helping people sell their tax credits while getting individuals, trusts, and closely held corporations the same benefits enjoyed by more prominent financial players.

He says larger taxpayers have routinely used the vast majority of available tax credits, making it harder for companies who pay fewer taxes to qualify and secure the incentive credits.

“This has led to smaller developers not being able to secure tax equity financing, which can affect the marketplace,” Kirshenbaum said.

Some industry experts think the current structure for tax credits is a hindrance for small developers and community-scale projects.

“With the current setup, most developers don’t have the option to keep the credits,” tax specialist Kari Brummond told The Epoch Times.

Brummond says that while developers usually need cash upfront for their projects, if they were able to keep the credits, they would end up with more money in the long run.

“They end up losing a lot in fees when they sell the credits to investors,” she said.

“Additionally, the accelerated and bonus depreciation rules for solar assets allow the claiming of an enormous amount of depreciation in the first year or two which is quite advantageous to taxpayers,” he said.

And while many experts assert big banks have been offered an unintentional tax shelter in the form of green energy incentives, some disagree.

The government is still incentivizing renewable energy projects, which was the ultimate goal at the end of the day, according to Bryen Alperin, the director of renewable energy and sustainable technologies for the tax equity investment firm Foss & Co.

“The taxpayer is still paying into the ‘social good’ with their money, they just have more control over how it is used.”