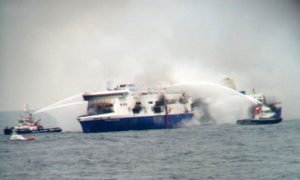 A journalist interviews a passenger of the Italian-flagged Norman Atlantic, that caught fire in the Adriatic Sea, in the harbor of Bari, southern Italy, Monday, Dec. 29, 2014. A ferry carrying nearly 500 people caught fire off the Greek island of Corfu early Sunday, trapping passengers on the top decks as gale-force winds and choppy seas hampered the evacuation. Greek and Italian rescue helicopters and vessels struggled to reach the stricken ferry, with nearby merchant ships lining up to form a wall against the raging gusts. (AP Photo/Luigi Mistrulli)
Europe

BARI, Italy—There were no fire alarms at first, no knocks on the door from the crew, just thick, acrid smoke filling cabins and waking passengers on the overnight ferry from Greece to Italy.

In the chaos that followed, passengers said, they received virtually no instructions from the crew. The principle of women and children first went out the window, and passengers started pushing and shoving and came to blows over seats in the lifeboats and helicopter baskets.

“Everyone there was trampling on each other to get onto the helicopter,” Greek truck driver Christos Perlis told The Associated Press by telephone from one of the rescue vessels summoned after the Italian-flagged ferry caught fire in the Adriatic Sea off Albania early Sunday.

“The jungle law prevailed,” said another Greek passenger, Irene Varsioti. “There was no queue or order. No respect was shown for children.”

Italian and Greek helicopter rescue crews Monday evacuated the last of the known survivors aboard the crippled, fire-blackened vessel, bringing the number rescued to 427.

But the death toll climbed to at least 10, and rescuers searched below deck and scoured the surrounding waters for more possible victims amid serious discrepancies in the ship’s manifest and confusion over how many people were aboard.

The vessel’s operator, Anek Lines, said 475 were on the ferry. But Italian officials said the names on the manifest may have represented just reservations, not actual passengers who boarded. Also, Italian navy Adm. Giovanni Pettorino said 80 of those rescued weren’t on the list at all, giving credence to suggestions from the Italian premier that the ferry may have been carrying a number of immigrants illegally trying to reach Italy.

“We cannot say how many people may be missing,” Transport Minister Maurizio Lupi said at an evening news conference.

The blaze broke out on the car deck of the Norman Atlantic while the ferry was traveling from the Greek port of Patras to Ancona in Italy. The cause of the fire was under investigation. Salvage crews went aboard to assess the damage.

Greek truck driver Afrosini Bezati said she feared several of her colleagues had perished because they chose to sleep in their rigs where the fire broke out rather than take cabins upstairs.

“I considered doing the same thing, to leave my room after having a shower and going down to sleep in the truck,” she said as she arrived at Elefsina Air Force base near Athens aboard a military plane. “They were stuck and could not get out.”

The Italian military congratulated itself for a remarkable around-the-clock rescue operation in horrendous weather: 40 knot (75 kph; 46 mph) winds, high seas, choking smoke and the dark of the Adriatic night. Hundreds of passengers, crew members and two dogs were plucked from the decks in helicopter baskets as the fire raged below.

As they waited to be rescued, they were drenched by cold winter rain and firefighting hoses, while their feet burned from the flames below.

“I witnessed an image of hell as described by Dante, on a ship where the decks were melting and we were trying to find some place that was not burning to stand on,” said Greek passengerChrysostomos Apostolou, a civil engineer who had been vacationing with his wife and sons, ages 8 and 14.

Some passengers suffered hypothermia, others mild carbon monoxide poisoning, but the first big group to reach land — 49 people who came ashore in Bari just after dawn Monday — walked off their rescue ship on their own, exhausted and draped in blankets to ward off the cold.

Navy Adm. Giuseppe De Giorgi hailed the Italian ferry captain, Argilio Giacomazzi, for having stayed on board to see the evacuation through, in striking contrast to the skipper in Italy’s last maritime disaster. Capt. Francesco Schettino is on trial on charges of manslaughter and leaving the ship early in the 2012 wreck of the Costa Concordia, in which 32 people were killed.

“As an old seaman, I offer my deferential salute to the ship captain for having done his job with great dignity and competence,” De Giorgi said. “He was last off, as a captain should be.”

Giacomazzi’s daughter, Giulia, said her father was “very precise and very careful” about his work.

“The classic story of the sea,” she told AP from the family’s home in La Spezia. “The captain is the last to leave the ship.”

But passengers had no praise whatsoever for the mostly Italian crew, complaining they were left to fend for themselves. Several said that they knew to get out of their cabins only because otherpassengers banged on their doors or because they couldn’t breathe from the smoke.

Vartsioti, who had been on vacation with her husband and two children, ages 10 and 14, said: “The entire crew was criminally unacceptable. There was no alarm. We awoke on our own.”

Perlis, the Greek truck driver, said that when the rescue helicopters arrived, passengers began to fight for position.

“The men, they started hitting us so they could get on first. They didn’t take into consideration the women or the children, nothing,” Perlis said. He said he reached safety after jumping in a helicopter basket carrying a girl.

British show-jumper Nick Channing-Williams told Sky News that he heard an alarm at 5 a.m., well after the flames were underway. Passengers said eventually an order went out for passengers to get their life vests and come to the upper decks.

“When we got out on deck, the flames were huge and all the cars were on fire,” he said.

“The fire was basically cooking everybody’s feet. … People just panicked,” he added. “When the flames are licking up the side of the boat and there’s no sign of help … you do feel somewhat helpless.”

Late Monday, Italy’s transport ministry sequestered the ferry, saying Italian and Albanian authorities would decide which port to bring it to amid dueling jurisdictions over any criminal or civil liability for the disaster.