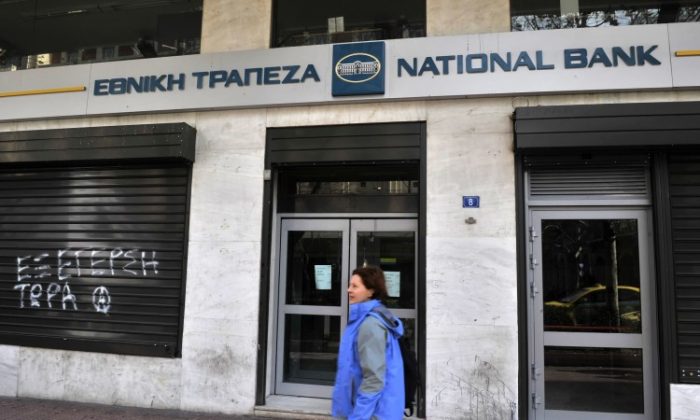 A woman passes by a National Bank branch in Greece last year. National Bank was the largest of four Greek banks to get part of a US$23 billion cash infusion from the European Financial Stability Fund, announced Monday. (Louisa Gouliamaki/AFP/Getty Images)
Business

Four Greek banks received a capital infusion of 18 billion euros (US$22.7 billion), according to a report on Monday.

The biggest lender in Greece, National Bank, received the bulk of the funds, or 7.4 billion euros (US$9.3 billion). Piraeus Bank received the second largest distribution

The funds are a welcome injection for the Greek banks, which are teetering on the brink of insolvency.

A CNBC report said that Greece could run out of cash to pay pensions and other bills by end of June, according to government officials.

The funds for the Greek banks are part of a second 130 billion euro (US$163 billion) bailout the Mediterranean nation received this year from the International Monetary Fund and other Eurozone constituents.

In Europe on Monday, market sentiment was that Greece could work out a plan to stay within the eurozone, as public opinion polls last week signaled that pro-bailout parties should be able to form a coalition government to keep Greece in the Eurozone following upcoming elections.

After the news, the EURO STOXX 50 Index rose by 0.9 percent, and Greece’s ATG index rose 2.6 percent.

While investors are becoming more hopeful leading up to the June 17 elections in Greece, news out of Spain was deflating. The Spanish banking sector, which withstood a round of credit rating cuts, looks increasingly weaker. Shares of Bankia SA dropped 27 percent on Monday in Madrid.