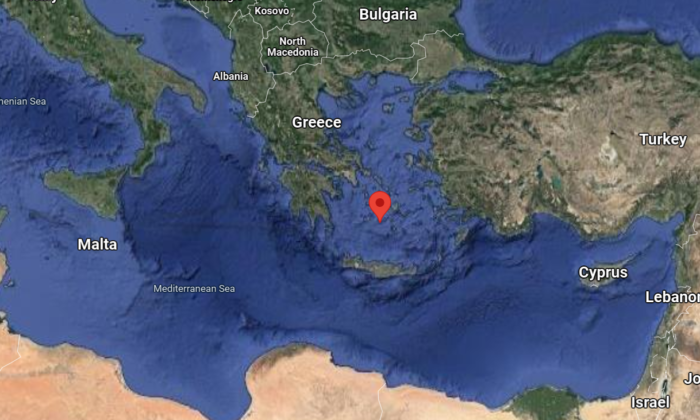 A map shows the location of the island of Folegandros, in Greece, on Dec. 22, 2021. (Google Maps)
Europe

ATHENS, Greece—Greece’s coast guard says one migrant has died and dozens are feared missing after a boat sank off the coast of the island of Folegandros.

The body of the unidentified man was recovered during an ongoing search and rescue operation launched early Wednesday after the boat sank some 180 kilometers (112 miles) southeast of Athens. The coast guard said 12 people, all believed to be from Iraq, had been rescued and transported to the nearby island of Santorini.

Most survivors said there were originally 32 people on the boat, but one told authorities there were about 50.

“The survivors made it onto a dinghy that was tethered to the boat. Only two of them were wearing life jackets,” Coast Guard spokesman Nikos Kokkalas told state-run ERT television.

“We always presume the worst-case scenario, in this case, that 50 people were on the boat.”

The coast guard said the operation began Tuesday night after it received information that a vessel carrying migrants had suffered engine failure and later began taking on water south of Folegandros.