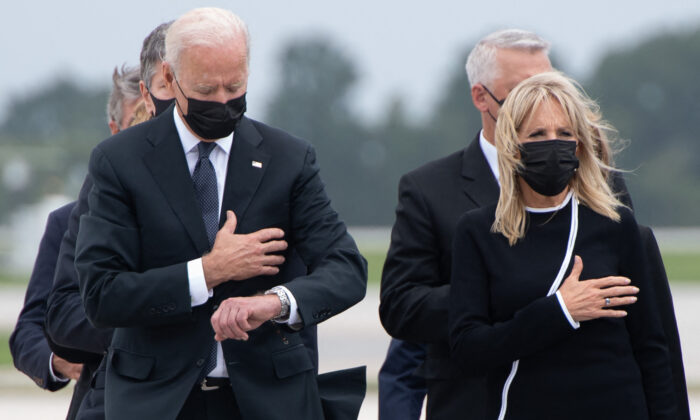 President Joe Biden, left, looks at his watch as he and First Lady Jill Biden attend the dignified transfer of the remains of fallen service members at Dover Air Force Base in Dover, Del., on Aug. 29, 2021. (Saul Loeb/AFP via Getty Images)
Viewpoints

When President Joe Biden and the Democrats proposed hiring 87,000 new Internal Revenue Service agents (but no new Border Patrol agents) it was a pretty good indication that they were more interested in policing Americans than stopping illegal immigration and securing the border.

But if you look a little deeper, you find that this pattern repeats. They are more interested in auditing Americans than defending us beyond our borders, too.

The salary of the proposed IRS agents (they currently average $73,257 a year with benefits) attracted the attention of a friend of mine who pointed out how little we pay basic enlisted military.

When I checked, I discovered the entry-level basic pay for the military is $21,996. That means an average new IRS agent earns more than triple what an entry level soldier, sailor, airman, guardian, or marine earns.

Military personnel sign up to risk their lives and defend our country. IRS agents sign up to audit the American people and find more money for politicians to spend.

The trend toward underpaying the military has been growing as salaries have failed to keep up with inflation.

Wesley Smith of the American Center for Law and Justice wrote:

“The Administration has recommended a 4.6 percent pay increase for members of the military. With inflation hovering between 8 and 9 percent, these young service members are basically receiving a 4 to 5 percent decrease in pay—a decrease in pay as everything from food to fuel to clothes to school supplies continues to increase in cost. Since January 2021, military members have received a 3 percent pay raise (2021), a 2.7 percent pay raise (2022) and the projected 4.6 percent raise for next year. None of these increases match inflation rates over the same time period. Over the last three years, members of our military have faced a real pay cut of 12.5 percent.”

In fact, as the purchasing power of military salaries has declined, more and more of our defenders are going on food stamps. According to a 2019 report from the Government Accountability Office, more than 22,000 active-duty troops used the food stamp program in that year.

The U.S. Army has admitted it has a problem. Sgt. Maj. Michael Grinston offered soldiers this guidance:

“With inflation affecting everything from gas prices to groceries to rent, some Soldiers and their families are finding it harder to get by on the budgets they’ve set and used before.”

Biden thinks $10,000 to $20,000 per student for loan forgiveness is fine—but not one extra cent for our military members.

The Democrats have found hundreds of billions for their pet projects, but they can’t find any extra money to help the military catch up with Biden’s inflation.

Secretary of the Army Christine Wormuth announced in August that the Army would only make 52 percent of its recruiting goal for the fiscal year. That is the cost of neglect, cheapness, and trying to create a woke military. And it threatens our national security.

Of course, President Biden has been the most anti-military President since Jimmy Carter. His indifference to the military was captured when he impatiently kept checking his watch during the return of the 13 dead young Americans who had been killed during his disastrous withdrawal from Afghanistan.

His priorities are pretty clear.

If you audit Americans to get more money for the politicians to spend, Biden loves you.

If you risk your life to defend America, Biden does not even have the time to pretend to care.