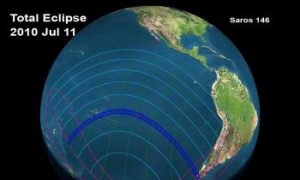 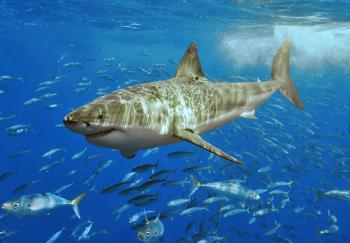 POPULATION IN DECLINE? A census of a great white shark population finds that the population is much smaller than expected. (Terry Goss/Wikimedia Commons)
Science

Great White Sharks off California May Be in Decline

Cassie Ryan
View profile
Follow
biggersmaller
Print
The great white shark could be disappearing in the northeastern Pacific where the size of an isolated population or clade has just been estimated.

A team of researchers counted the population by luring sharks into photo range using a seal-shaped decoy from a boat. They took 321 photos and identified 130 individuals from their dorsal fins. Using a statistical model, they extrapolated that there are only an estimated 219 adult and sub-adult sharks in the area, much less than populations of other top predators.

“This low number was a real surprise,” said lead author and doctoral student Taylor Chapple in a University of California-Davis press release.

“It’s lower than we expected, and also substantially smaller than populations of other large marine predators, such as killer whales and polar bears. However, this estimate only represents a single point in time; further research will tell us if this number represents a healthy, viable population, or one critically in danger of collapse, or something in between.”

“We’ve found that these white sharks return to the same regions of the coast year after year,” said co-author Barbara Block from Stanford in the press release. “It is this fact that makes it possible to estimate their numbers. Our goal is to keep track of our ocean predators.”

This clade is one of three known white shark populations in the world. The other two are in South Africa and the Australia New Zealand region.

The methods used in this study can be applied at other locations to monitor the status of other populations and ascertain protection needs around the world.

“The decline of sharks in the global oceans underscores the need for careful assessment and monitoring of remaining populations,” the researchers wrote in the study.

The study was published online in the journal Biology Letters on March 9.