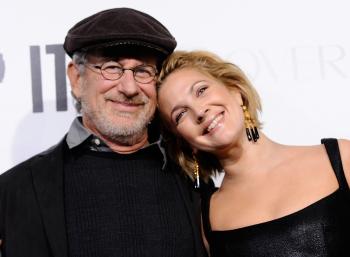 Actress/producer Drew Barrymore can now add director to her growing number of titles as buzz builds about “Whip It,” her directorial debut. The film depicts a teenager who defies her mother’s wish for her to become a beauty pageant queen and instead opts to attempt roller derby. The flick received positive reviews at the Toronto Film Festival. “Whip It” opens nationwide on Oct. 2.

Cable network TLC has ceased filming the children of Jon and Kate Gosselin at their father’s insistence. The five-year-old sextuplets and eight-year-old twins star with their divorcing parents in the much talked about reality series, “Jon & Kate Plus 8.” Jon Gosselin, through lawyers, reportedly issued a demand to TLC that the production crew vacate the family’s home and discontinue filming. This action came the same day the network announced the show would don a new title, “Kate Plus 8,” and that Jon would be less involved, although still under contract. Mr. Gosselin says he’s concerned for the welfare of his children amidst a media firestorm. Mrs. Gosselin says he is acting in his own self-interest.

The Walt Disney Family Museum opened in San Francisco this week. Founded by Disney’s grandson, Walter E.D. Miller, and Miller’s mother, Diane Disney Miller, the museum aims to tell the story of the man, not the brand. The U.K.’s Daily Mail quoted Diane Disney Miller as saying, “My father has one of the most well known names around the world, but as the Disney brand has grown the man has become lost." The Walt Disney Family Museum, located in the Presidio, is open Wednesday through Monday.

Will Ferrell to be a Dad Again

Comedian Will Ferrel and his wife Viveca Paulin are awaiting their third child. Us Magazine reports that the parents of sons Magnus and Mattias are expecting another boy. The two have been married since 2000.

Actress and reality star Tori Spelling was rushed to the hospital after experiencing severe abdominal pain this week. Spelling’s husband, Dean McDermott, gave an update on Tuesday via Twitter saying, “Just out of the hospital. After a battery of tests, no conclusive answers. She still feels terrible. Hope it passes soon. She's in a lot of pain.” The pair has been tweeting frequently about what they’ve dubbed “The McDermott Family Bug.”