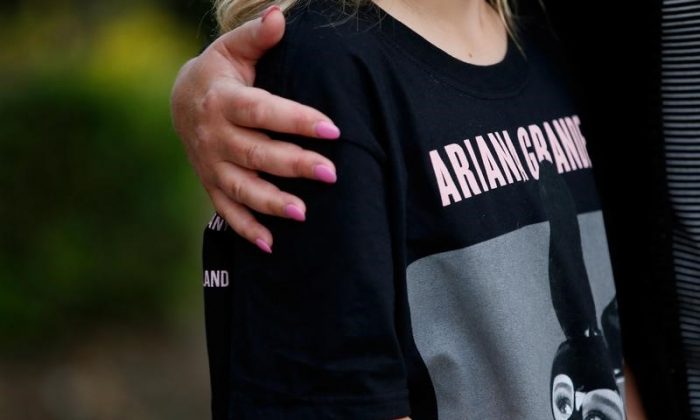 A youngster wearing a t-shirt showing singer Ariana Grande talks to the media near the Manchester Arena in Manchester, Britain n May 23, 2017. (REUTERS/Andrew Yates)
Entertainment

LOS ANGELES—Pop star Ariana Grande will host a star-studded benefit concert in Manchester, England, on Sunday for the victims of the suicide bombing at her May 22 concert there, her record company announced on Tuesday.

Last week’s suicide bombing, which killed 22 people, took place moment after Grande finished a concert in Manchester. All proceeds from the concert will go to the We Love Manchester Emergency Fund which was set up by the Manchester City Council in partnership with the British Red Cross.

Grande, 23, is offering free tickets to the charity concert to all of those who were at her Manchester show on May 22.

The suicide bombing injured more than 100, many of them members of Grande’s large, young female fan base. Grande was unharmed but she later canceled several concerts scheduled in London and Europe through June 5.

Grande said in an open letter on her social media accounts last week that “There is nothing I or anyone can do to take away the pain you (her fans) are feeling or to make this better. However, I extend my hand and heart and everything I possibly can give to you and yours, should you want or need my help in any way.”

Tickets for Sunday’s concert will go on sale on Thursday.