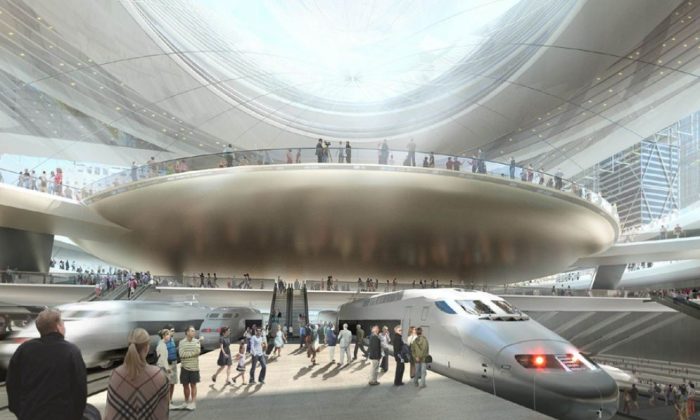 Planning for the New Penn Station

NEW YORK—When the original Penn Station was demolished in the 1960s, mass transit was on the decline and most public works projects focused on accommodating automobiles and suburban infrastructure. In the five decades since then, the trend has reversed. Both mass transit ridership and New York City’s population have grown in the past decade and are projected to continue.

As the trend continues, the infrastructure that made sense to the planners in 1960s is now outdated. Penn Station, pierced by hundreds of structural columns from Madison Square Garden (MSG) above it, is at capacity. As ridership on both subways and intercity trains that stop at Penn Station continues to grow, the station’s dark corridors and cramped spaces are bursting at the seams. The station was built to handle 200,000. More than 500,000 people pass through it on an average weekday today.

The problem sprawls outside of the station as well: west Midtown is significantly underdeveloped in stark comparison to business districts surrounding major terminals around the world. Penn Station is the busiest transportation hub in the Western Hemisphere, but has neither the infrastructure nor the business district to match the tremendous volume of riders passing through it every day.

But not all is lost. Municipal Arts Society (MAS), which considers Penn Station “the critical infrastructure project of our time,” scored a key victory this summer when MSG was given only a 10-year lease. Ten years may seem like a long time, but MAS sees the time as a critical window to summon public, political, and planning support for a dramatic revamp of west Midtown. The society released a report on Oct. 17 that outlines a plan for a revamp of west Midtown, which centers on a vision for a grand new Penn Station.

In an ideal scenario for the MAS vision, which currently has no financial or legislative foundation, the new station will take shape when MSG’s lease expires in 2023. The report proposes rebuilding the arena at a suitable location nearby and using the cleared space to build a grand, airy, and dignified space that can accommodate the swelling crowds of commuters and travelers.

The crowds have been growing for the past decade. The average number of weekday Penn Station riders on NJ Transit, Long Island Railroad, and Amtrak grew by 26 percent in the past decade, according to a 2007 Regional Plan Association report. In the same period, subway ridership at the station increased by 34 percent.

The three intercity rails, NJ Transit, LIRR, and Amtrak are operating at capacity, and ridership is projected to increase. According to a 2012 report from the Graduate School of Applied and Professional Psychology at Columbia University, the average number of riders on NJ Transit alone is projected to grow by 28 percent by 2030.

At the same time, New York City’s population grew by more than 1 million since 1990, according to the U.S. Census Bureau.

Penn Is Only Part of the Plan

A new Penn Station will go a long way at solving the current problems, but the report’s authors stress that Penn is just part of the plan. The Moynihan Station, which is already under construction inside the U.S. Post Office building west of Madison Square Garden, is a key addition. It can serve riders while the new Penn Station is built, but will eventually accommodate only Amtrak passengers, the report says, adding that a new MSG is also a must. One of the central, though still vague suggestions, is redeveloping west Midtown to connect these three structures to the streets and the rest of the city.

As it stands, the new report is only a vision. No funding has been identified and no zoning changes proposed. Public support, nevertheless, is clear: 74 percent of New Yorkers said the next administration should see rebuilding Penn Station as a “top priority” or “an important consideration” in an August survey by Marist Poll commissioned by MAS.

Mayor Bloomberg has also stressed the urgency of transportation investment in an unrelated statement in April.