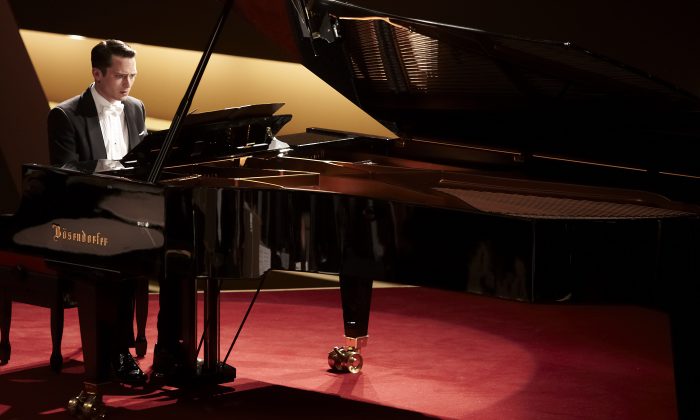 Elijah Wood is pianist Thomas Selznick, whose life depends on not missing a single note in the film "Grand Piano." (Magnet Releasing)
Entertainment

Pianist Thomas Selznick has done the nearly impossible, creating buzz for contemporary classical music. Much to his embarrassment, he did so by crashing and burning during an attempt to perform his late mentor’s “impossible to play” composition.

After years of nursing his wounds, his celebrity wife has coaxed him into making his concert hall return, playing the very piano once owned by his famous teacher. However, a criminal mastermind will hijack the program in Eugenio Mira’s “Grand Piano,” which opens this Friday in New York.

Before the show begins, Selznick’s friend and conductor William Reisinger counsels him not to sweat a flubbed note. Considering the density of the music they are about to perform, nobody in the audience will possibly notice. It is good advice that musicians of all styles should take to heart.

Unfortunately, Selznick will not have that option. Instead, the shadowy “Clem” demands, through an earpiece secretly slipped to Selznick, that he must play each selection perfectly. One missed note and it is curtains for him and his wife, Emma.

Of course, it gets even more complicated. Clem also has a last-minute set change. For his solo closer, Selznick is to substitute “La Cinquette,” the very piece that gave him so much trouble before. Naturally, his mentor owned a Bösendorfer, because his unplayable piece requires those extra keys.

As the concert progresses toward its climax, Selznick engages in a cat-and-mouse game with the gunman, while remaining rooted at the keyboard, in plain view to all.

Written by Damien Chazelle, this year’s Sundance sensation for “Whiplash,” “Grand Piano” has a nice ear for how musicians talk and think. Shrewdly, his script takes its time establishing the Selznicks and Reisinger, as well as the elite classical world they inhabit. Mira also sets the scene quite effectively, making the mostly digital concert hall feel like a very real and ominous place.

Evidently, Elijah Wood’s youthful piano lessons paid off, because he looks credible enough at the keys. More importantly, he conveys the perfect level of nervous, ticky stress for a socially awkward artist like Selznick. Don McManus also adds a nice touch of flamboyance as Reisinger.

Frankly, the revelation of the actor playing Clem feels like it is intended to be a surprise, even though his name is above the title on the one-sheet. In any event, he is more or less adequate as the mystery villain, even though “Grand Piano” is by far his best film since at least 2003.

In contrast, it is safe to say that “Bill & Ted’s” Alex Winter largely upstages the mostly unseen Clem as his henchman with an attitude.

“Grand Piano” is a nifty thriller that archly capitalizes on the claustrophobic setting and the neurotic nature expected from musicians of Selznick’s rarified caliber. Cinematographer Unax Mendía gives it a wonderfully dark, stylish look, suggesting a cross between the giallo and Hitchcock (whose Royal Albert Hall sequence in “The Man Who Knew Too Much” stands as an obvious inspiration for the film).

Well played and tightly constructed, “Grand Piano” is enthusiastically recommended when it opens this Friday, March 7, in New York at the Cinema Village.