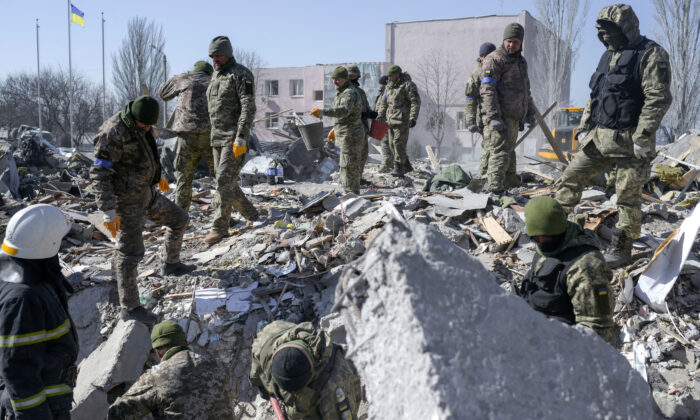 Ukrainian soldiers search for bodies in the debris at the military school hit by Russian rockets the day before, in Mykolaiv, southern Ukraine, on March 19, 2022. (Bulent Kilic/AFP via Getty Images)
Russia-Ukraine War

Grammarly Inc. is continuing to pay full salaries and benefits to its employees in Ukraine who have joined the army amid Russia’s invasion, the company’s chief executive said on March 21.

“The team is, first and foremost, focused on their safety,” CEO Brad Hoover told Bloomberg.

He did not specify how many of Grammarly’s staffers have joined the Ukrainian army. However, prior to the Moscow-led invasion, nearly half of Grammarly’s more than 600 employees were based in Ukraine, according to Bloomberg.

The CEO of the Ukrainian company—headquartered in the United States—said that many of those workers have fled Ukraine or relocated to other areas of the country, away from conflict zones.

The Epoch Times has contacted a Grammarly spokesperson for comment.

Grammarly is used by 30 million people daily, according to the company, and was valued by investors at $13 billion in November 2021.

In a blog post earlier this month, Grammarly said it is a company with a “deep connection to Ukraine” and called the Russian attacks “horrific atrocities” that have “caused immense suffering, fear, and heartbreak.”

After Russian President Vladimir Putin announced a “special military operation” in Ukraine, Grammarly’s departments with operations in the country redistributed those responsibilities to other parts of the company, and Hoover noted that he had spent a significant amount of time on relocation and relief efforts.

The majority of Grammarly’s Ukrainian-based workforce is now back online, Hoover said. The company is also providing paid leaves of absence for those employees who have been forced to flee their homes because of the war, Hoover said.

Ten million people have fled Ukraine since the Kremlin’s invasion began on Feb. 24, according to United Nations High Commissioner for Refugees Filippo Grandi.

“The war in Ukraine is so devastating that 10 million have fled either displaced inside the country or as refugees abroad,” Grandi said in a Twitter post on March 20.

Elsewhere, Grammarly announced earlier in March 2022 that it has committed to donating $5 million—the net revenue generated from the usage of Grammarly’s product in Russia and Belarus since 2014—to organizations and funds dedicated to the Ukrainian people. The company has also blocked access to its services to users in Russia and Belarus.

Hoover’s comments come after President Joe Biden vowed on March 14 to send weapons to Ukraine as well as money, food, and aid, while pledging that the United States will “welcome Ukrainian refugees with open arms.”

The United States is sending an additional $800 million in military assistance to Ukraine, bringing the total U.S. security assistance committed to the country to $1 billion since Russia invaded and a total of $2 billion since Biden took office.

The White House reported a total of 800 anti-aircraft systems, 100 grenade launchers, 5,000 rifles, 1,000 pistols, 400 machine guns, and 400 shotguns as well as over 20 million rounds of small arms ammunition, among other equipment, would be included in the $800 million package.