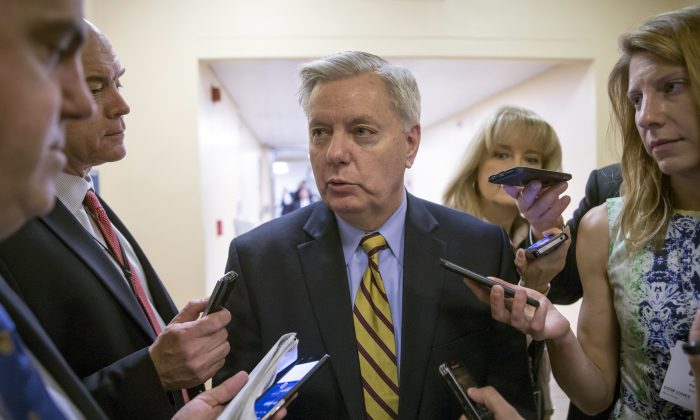 Graham on Impeachment: ‘Should Be Dismissed in the Senate Without a Trial’

Sen. Lindsey Graham (R-S.C.) said he will introduce a resolution in the Senate that condemns the House impeachment inquiry, saying any articles should be dismissed in the Senate without trial.

President Trump and Congressional Republicans have criticized how House Democrats have handled the impeachment inquiry, saying they should hold a vote to formally launch the investigation.

“This resolution puts the Senate on record condemning the House. … Here’s the point of the resolution: Any impeachment vote based on this process, to me, is illegitimate, is unconstitutional, and should be dismissed in the Senate without a trial,” Graham told Fox News’ Sean Hannity.

Graham said the office of the president will be forever changed because of how Democrats are handling the inquiry into impeachment.

“For the future of the presidency, we cannot allow future presidents and this president to be impeached based on an inquiry in the House that has never been voted upon, that does not allow the president to confront the witnesses against him, call witnesses on his behalf and cross-examine people that are accusing him of misdeeds,” he said, adding that Trump should have the same rights as Nixon and Clinton.

The House is holding closed-door depositions with former and current Trump administration officials as part of a probe into whether Trump used his office to pressure Ukraine into investigating former Vice President Joe Biden and his son.

The House Intelligence, Foreign Affairs, and Oversight and Reform Committees are handling the inquiry.

On Wednesday morning, Rep. Steve Scalise (R-La.) blasted Democratic House leaders’ methodology. “Maybe in the Soviet Union this kind of thing is commonplace,” he said, adding that it’s behind “closed doors.” Other Republican lawmakers took issue with how the depositions were being carried out.

Regarding the pushback last week, Intelligence Committee Chairman Adam Schiff (D-Calif.) tweeted that House Republicans have ” lacked the courage to confront the most dangerous and unethical president in American history.”

Meanwhile, Laura Cooper, the deputy assistant secretary of defense for Russia, Ukraine, and Eurasia, is expected to face questions about Trump’s decision this year to withhold $391 million in security assistance to Ukraine approved by Congress to help deal with Russia-backed separatists in the eastern part of the country. She arrived at the U.S. Capitol, accompanied by security personnel, for her closed-door testimony.

The impeachment inquiry, triggered by a whistleblower complaint against the president lodged by an individual within the U.S. intelligence community, focuses on a July 25 telephone call in which Trump asked Ukrainian President Volodymyr Zelenskiy to carry out those two investigations. Zelenskiy agreed during the call. Trump has denied the claim.