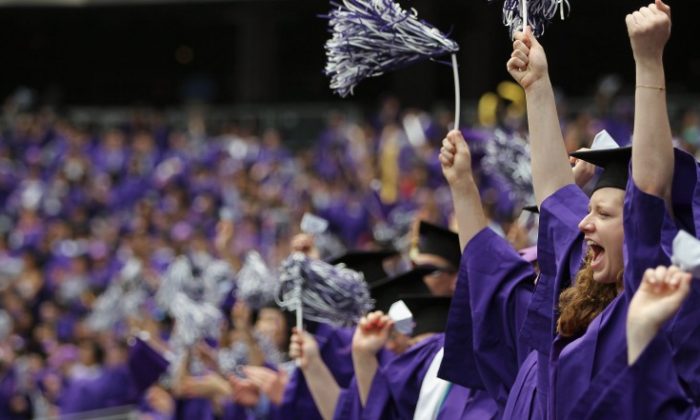 Students celebrate at New York University’s commencement ceremony at Yankee Stadium on May 16 in the Bronx borough of New York City. The National Center for Education Statistics (NCES) estimates 1,781,000 students at the bachelor’s-degree level will graduate in 2012. (Mario Tama/Getty Images)
US

Graduation is a time of fresh beginnings. Embarking on a path where grown-up choices abound. How to spend one’s time, which career path to travel, whether and when to start a family—the consequence of each deserves careful thought. Then there are the unforeseen hardships and changes that bring yet more choices and challenges.

In the face of so many big questions, recent graduates might turn to an unlikely place for guidance and support: America’s elders.

Having watched a whole lifetime go by—lasting marriages, careers past, empty nests, wars, poverty, painful loss of loved ones, death, and illness—American elders know how to survive and how to thrive.

According to Karl Pillemer, professor of gerontology at Cornell University, they have a lot of wisdom to offer the young.

In 2004, Pillemer was doing research in a nursing home when a nurse introduced him to June, the surname of an elderly lady who was losing her eyesight, and who had only a few weeks left to live. Pillemer sat down with June. As they talked, he found June “an incredibly vibrant, alive, and positive person,” said Pillemer who wondered how she could be so happy. So he asked her.

June told Pillemer that she felt it was her responsibility to be as happy as she could be, no matter what her circumstances were.

“She really had to make a choice to be happy every day. You can’t just wait to be happy because something is going to happen to you, you have to make a conscious choice to be responsible for your own happiness,” Pillemer said, adding that it’s better to learn this in your 20s than when you are in your 60s.

June was an inspiration.

Pillemer spent the next six years talking with nearly 1,200 American elders, asking them the most important lessons they had learned over the course of their lives. Pillemer calls his search “The Legacy Project.” What he learned, he put in a book titled, “30 Lessons for Living: Tried and True Advice from the Wisest Americans.”

The book offers practical advice drawn from generations past. There’s something in there for anyone at any crossroads, but Pillemer offers some specific lessons to recent high school and college graduates.

Take risks to avoid regrets. Choose excitement over money. Make the most of a bad job. And use those graduation gifts to travel, as the elderly often wish they had traveled more in their youth.

The common thread of hardship ties the span of human lives together, which our treading feet endure. Many of the elders told Pillemer that they had experienced a tragedy that ruined their life for months or years, but that life goes on. “They were able to make that decision to step beyond it and learn how to live their life again,” says Pillemer.

Helga, a lady in her mid-80s, fled Germany as a child when the country was faced with genocide and murderous crimes at the hands of the Nazis. Helga settled in the United States and raised a wonderful family. Then, suddenly, her middle daughter died in a plane crash while she was in college.

“She told me that she basically laid on the couch for three years torturing herself, her husband, and her other children with her depression and guilt,” Pillemer says.

However, Helga changed her life with the difference in one thought. “She basically said to herself ‘I can’t go on like this, I have to look to the living ones,’ and she changed her life around,” says Pillemer.

In his time with older people, he heard them say over and over, “Tell younger people that life is too precious, to not waste it, and to really think about how they spend their time. Think about how to spend it in the most meaningful and fulfilling way.”

Pillemer encourages the young to really think like you will be 90 years old someday. Don’t live under the illusion that you have forever, and pack as much into life as you can.

When looking back, elders say, “I can’t believe how short my life was,” says Pillemer. “They say that not to depress young people, but to encourage them to really choose experiences that are going to be valuable to them and to not waste time in a bad job,” he added. “You don’t have unlimited time.”