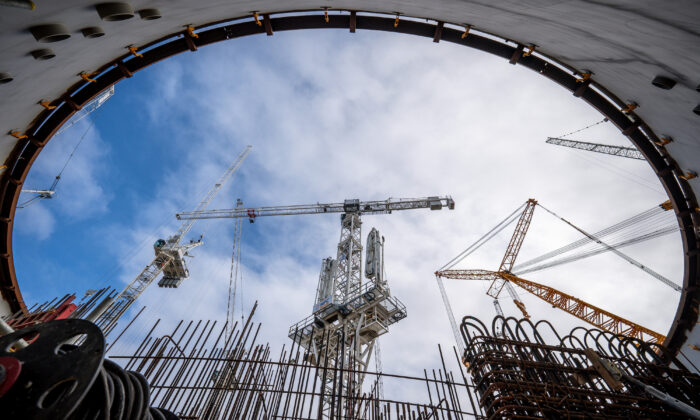 A crane moves building materials into the circular reinforced concrete and steel home of a reactor at Nuclear Island 1, at Hinkley Point C nuclear power plant near Bridgwater in Somerset, England on Sept. 23, 2021. (Ben Birchall/PA)
UK

The UK’s ambitious plans to ramp up nuclear power, announced last month, may lead to a hike in household bills according to the Business Secretary.

The government announced a new UK Future Nuclear Enabling Fund (FNEF) of £120 million ($146 million) on May 13 that will help to “mature potential nuclear projects ahead of any government process to select the next nuclear projects.”

The UK’s secretary of state for Business, Energy and Industrial Strategy Kwasi Kwarteng said that “nuclear is back on the table,” according to a May 12 BBC interview.

Kwarteng was visiting north Wales, where the government has pledged to build a new station at Wylfa on Anglesey.

He said people in the UK might expect a small levy to be added to their bills in the short term in order to provide more money for nuclear power station construction: “it might have a small effect.”

The government wants nuclear to supply 24 gigawatts (GW) of electricity by 2050, which would represent up to around 25 percent of the UK’s projected electricity demand, according to the BBC.

The FNEF will provide targeted, competitively-allocated government grants which will help nuclear construction projects, including small modular reactors, to “attract the private investment they need to help make them a reality.”

This follows last year’s announcement of a new financing model, which shifts the financial risk to consumers, and which also provides a mechanism to squeeze the out CCP-backed China General Nuclear Power (CGN) from its 20 percent stake in Sizewell C, Suffolk, eastern England.

Millions of Britons have faced a sharp spike in their energy bills in the past new months down, in part, to record increases in the global price of gas. In April, the British energy regulator Ofgem increased the price cap in what it called a “once in a 30-year event.”

This week, the Chief Executive of Ofgem Jonathan Brearley said prices in the energy market will remain “highly volatile” with further increases expected.

On the new energy strategy announced in April, Prime Minister Boris Johnson said that a new reactor will be built every year, with Kwarteng adding that the government’s £375 million ($459 million) investment will “unlock the enormous potential” of hydrogen and nuclear power.

Almost half of the UK’s current nuclear capacity is due to be decommissioned by 2025 and only one new plant, Hinkley Point C, is currently under construction and owned by EDF Energy and CGN.

“Nuclear power is a key part of the UK’s energy mix, helping to reduce dependence on global gas markets, boosting UK energy independence, protecting consumers from high energy bills, and stimulating investment in nuclear as a clean energy technology of the future,” wrote the government in a statement announcing the FNEF.

PA Media and Simon Veazey contributed to this report.