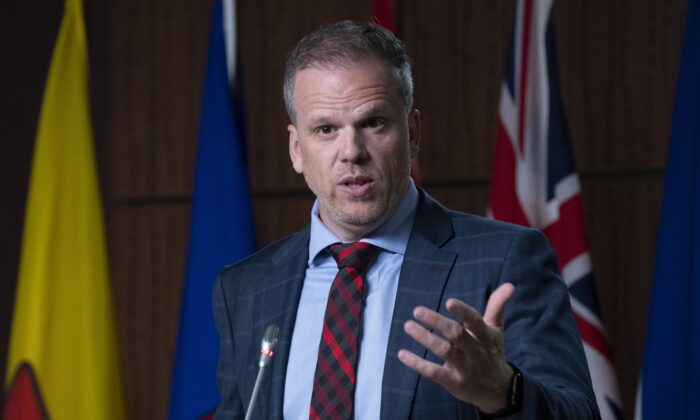 Leader of the Government in the House of Commons Mark Holland speaks about the upcoming session during a news conference on Parliament Hill on Sept. 20, 2022 in Ottawa. (Adrian Wyld/The Canadian Press)
Canada

“It’s a time of great challenge globally and Canadians are feeling that,” Holland said during a press conference in Ottawa on Sept. 20.

“We have the war in Ukraine, we’re up against global headwinds dealing with inflation, we have the pressures of climate change: It is a time when we’re all called to the hour to serve at our highest and our best—offering real and concrete solutions to improve the lives of Canadians and to offer stability.”

Holland said it’s important the measures proposed to deal with the affordability issue be “rooted in reality,” after which he criticized new Conservative Leader Pierre Poilievre’s interest in cryptocurrencies.

Trudeau announced the inflation relief measures the government plans to pass in Parliament on Sept. 13.

The Liberals are seeking to double the Goods and Services Tax (GST) credit for six months and give a one-time top-up worth $500 to the Canada Housing Benefit for Canadians who spend at least 30 percent of their incomes on rent. The government also intends to provide up to $650 per year for dental care to children under 12 who do not have access to dental insurance.

Holland said it’s still not decided whether these measures will be presented to the House as separate bills or in an omnibus bill.

The house leader said he was not in a position to say whether Canadians who could benefit from the measures would be receiving money before the bills are passed.

Critics have said the interventionist measures proposed to combat inflation are likely to fuel it. Poilievre has repeatedly criticized the Liberal government for its spending, particularly during the pandemic, saying inflation is largely being fueled by domestic policies rather than global phenomena.

“After two years of warnings by the Conservatives, the Trudeau government still doesn’t have a plan to fix inflation,” wrote Poilievre in a statement reacting to the most recent inflation numbers released today.

The Tory leader noted that while the Consumer Price Index dropped year-over-year from 7.6 percent in July to 7 percent in August, the food prices increased by 10.8 percent, the fastest pace since 1981.

Along with the focus on affordability, Holland outlined other priorities for the current parliamentary session over the next 11 weeks, with the first priority he mentioned being gun control.

The Liberals’ Bill C-21 intends to freeze the market on the sale, purchase, or transfer of handguns in Canada, except for a limited set of individuals and businesses.

In mid-August, the government imposed a temporary ban on handgun importations as a stop-gap measure before C-21 is adopted.

The bill will also attempt to implement red-flag provisions, which could lead to legal firearms owners having their weapons confiscated following a denunciation to law enforcement on issues such as domestic violence.

Heritage Minister Pablo Rodriguez has presented the bill as a measure to prop up the media sector which he says is in “crisis.”

“This [crisis in the news sector] contributes to the heightened public mistrust and the rise of harmful disinformation in our society,” he said while announcing the bill in April.

Other government priorities include Bill C-22, which seeks to help people with disabilities financially, and Bill C-13 to further protect the French language.

While the Liberals will benefit from the support of the NDP on a host of measures, which stem in part from their confidence and supply agreement, Holland was asked by a reporter whether he thought the Conservatives are willing to cooperate.

Peter Wilson contributed to this report.