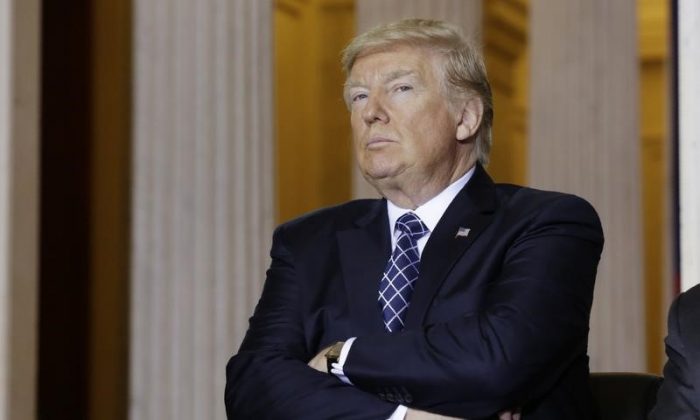 WASHINGTON—The threat of a government shutdown this weekend appeared to recede on Tuesday after President Donald Trump backed away from a demand that Congress include funding for his planned border wall with Mexico in a spending bill.

In remarks to conservative news media outlets that were confirmed by the White House, Trump said on Monday evening he may wait until Republicans begin drafting the budget blueprint for the fiscal year that starts on Oct. 1 to seek funds for the wall.

Trump’s fellow Republicans control both chambers of Congress but the current funding bill, which has to be passed by Friday night, will need 60 votes to clear the 100-member Senate, where Republicans hold 52 seats and so will have to get some Democratic support. Democratic leaders had said it would not get it if funds for the wall were included.

Even if the fight over wall funding is over, Republicans and Democrats still have some difficult issues to resolve over the next day or two.

With his demand for the inclusion of wall funding, Trump had been running the risk of being blamed by Democrats for a partial shutdown of the government that would start on Saturday.

White House demands that taxpayers foot the bill for the border wall were particularly weakened given that Trump campaigned on a promise not just to build a wall but to make Mexico pay for it.

Senate Democratic leader Chuck Schumer welcomed the Monday night comments and noted that there were opponents of the wall among Republicans too.

“It’s really good news that the president seems to be taking the wall off the table in the negotiations we’re having on an appropriations bill this week,” Schumer said on the Senate floor on Tuesday morning.

“It would remove the prospect of a needless fight over a poison pill proposal that members of both parties don’t support. … If the threat of the wall is removed, as I hope is the case, our negotiations can continue and we can, hopefully, resolve all of the outstanding issues by Friday.”

If no spending measure covering April 29 to Sept. 30 is in place before 12:01 a.m. on Saturday, government funds will halt and hundreds of thousands of the country’s several million federal employees will be temporarily laid off.

Those in jobs deemed essential, such as law enforcement, are expected to keep working in the hope they will receive back pay. Non-essential sectors such as national parks are liable to be closed and programs such as federally funded medical research will grind to a halt.

Financial firm Height Securities said in a research note on Tuesday that Trump’s flexibility on wall funding reduced the risk of a shutdown, even if only short-term spending was approved.

The border wall, which Trump says is the best way to halt the flow of illegal immigrants and drugs into the United States, was a signature election pledge last year.

By dropping his demand for immediate funding for it, he would reduce his ability to tout progress on his agenda since he took office on Jan. 20. Democrats may also feel emboldened to fight against funding for the wall in the future too.

Trump has said Mexico will repay the United States for the wall if Congress funds it first. But the Mexican government has been adamant it will not provide any financing, and Trump has not laid out a plan to compel Mexico to pay. Department of Homeland Security internal estimates have placed the total cost of a border barrier at about $21.6 billion.

Senate Republican Leader Mitch McConnell, who spoke in the Senate before Schumer, said bipartisan talks were continuing on the spending bill.

“I look forward to more productive conversation with senators, our House colleagues, and the White House so that we can get this important work done quite soon,” he said.

Schumer listed other issues the Democrats want to see resolved in the bill and said they were concerned about the ratio of increase of defense and non-defense spending. Democrats have sought a one-to-one ratio in terms of spending increases.

If negotiations over the bill slow or stall, Congress could pursue a short-term extension of existing spending levels to avoid a government shutdown, giving lawmakers more time to reach a deal.

Short-term funding measures, which are known as continuing resolutions and which cover periods of days or weeks, have been used to avert government shutdowns in the past. But in 2013, conservative Republicans forced a 17-day shutdown in a failed attempt to repeal then-President Barack Obama’s healthcare law, the Affordable Care Act.