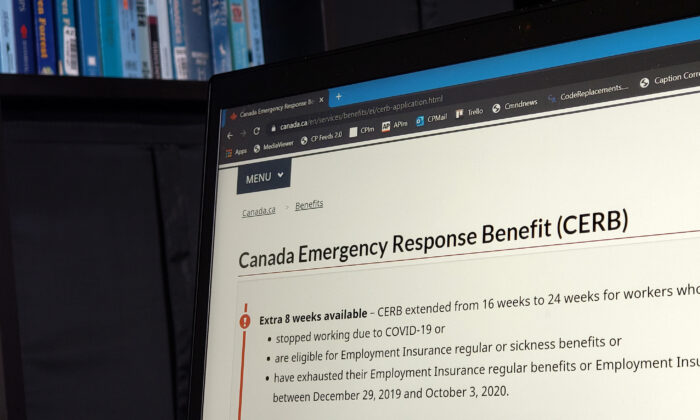 The landing page for the Canada Emergency Response Benefit is seen in Toronto on Aug. 10, 2020. (Giordano Ciampini/The Canadian Press)
Canada

Government Recovers About a Third of $3 Billion Erroneous CERB Payments

The federal government has so far recovered about a third of the roughly $3 billion in COVID-19 relief benefits paid to ineligible people, the cabinet disclosed in records submitted to the House of Commons.

In an Inquiry of Ministry, obtained by Blacklock’s Reporter, the cabinet said notices have been sent to roughly 1.7 million Canadians who do not qualify for but have received the Canada Emergency Response Benefit (CERB). A total of 8.9 million people received the benefit, meaning that ineligible applicants account for 19 percent of the recipients.

“The intended total recovery amount cannot be predicted with accuracy at this time,” Minister of National Revenue Diane Lebouthillier said in the records.

The records were disclosed at the request of NDP MP Peter Julian, according to Blacklock’s Reporter.

CERB was one of the first COVID-19-related relief programs passed by Parliament on March 25, 2020—just two weeks after the World Health Organization declared the novel coronavirus a global pandemic. The program provided a $2,000 relief fund to “employed and self-employed Canadians who were directly affected by COVID-19,” over a four-week period.

The program was initially budgeted at $24 billion, but by Aug. 16, 2020, roughly 8.6 million individual claimants had received $70 billion. The total payment made through the program reached up to $81.6 billion, the records show.

“There is no doubt that when a program is created quickly, there is going to be some abuse of that program,” Liberal MP Kevin Lamoureux said during a parliamentary debate on Nov. 29, 2021.

The number of CERB claimants was roughly three times that of unemployed at the peak of COVID-19 lockdowns, the records show. A 2021 report from the Office of the Auditor General shows that the Canada Revenue Agency was aware of risks of fraudulent applications early on when running the program, as well as risks of people applying for multiple relief benefits when they should not.

“As of 30 November 2020, payments were stopped for more than 30,000 potentially fraudulent applications. This represented approximately $42 million,” the 2021 report says.

The new Inquiry of Ministry, however, disclosed much higher figures. Cabinet said it was trying to retrieve funds owed from more than 72,000 Employment Insurance claimants who received additional pandemic relief. So far, a total of $65.8 million has been retrieved.

Of a total $2.9 billion paid in error to 1.7 million claimants overall, less than a billion was recovered, the Inquiry of Ministry record shows.

No penalties or interest would be charged on “benefit overpayments” under the now-disbanded CERB program, Employment Minister Carla Qualtrough said in a statement on Nov. 25, 2021.

“Canadians will not be put into financial hardship by having to repay emergency benefits they received,” Qualtrough said.

“At the same time, the government is committed to the financial stewardship of its programs and has zero tolerance for fraud.”

In a separate Inquiry of Ministry, also obtained by Blacklock’s Reporter, the cabinet said it was pursuing overpayments of as little as $7 and as much as $14,000. This record was disclosed at the request of NDP MP Daniel Blaikie.

“The average amount of outstanding debt on these notices is $1,056,” the Inquiry said.

The Canada Revenue Agency said it had spent $147.6 million worth of staff time auditing CERB accounts.

“The Agency is committed to ensuring individuals receive only the benefits to which they are entitled,” the Inquiry said.