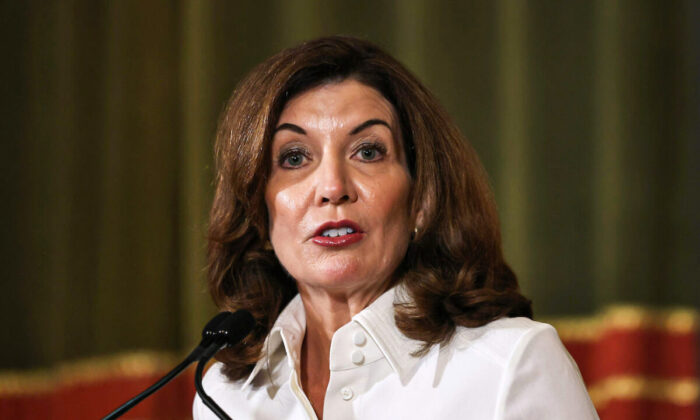 New York’s governor, Kathy Hochul, enjoys such deep and entrenched relationships within Democrat Party politics in the deep blue state that she is cruising to an all-but-certain easy victory in the primary election set to take place Tuesday, avoiding the intensive and public campaigning efforts that incumbent politicians make when their seats are up for grabs. But the marked rise in crime in New York City and other parts of the state has caused voters to associate the governor with failed policies and jeopardized her chances of reelection, experts say.

Though Hochul is not running unopposed—her primary challengers include Rep. Thomas Suozzi (D-N.Y.) and Public Advocate Jumaane Williams—she has not conducted her reelection campaign like a politician facing serious challenges. Sources such as Politico and the New York Times have run articles in recent days noting the low profile that Hochul has kept during the run-up to the June 28 primary vote. While her campaign has spent lavishly on advertising, Hochul has pursued a “Rose Garden” approach and largely eschewed public appearances and rallies, to the consternation even of certain of her fellow Democrats such as former Rep. Charles Rangel (D-N.Y.).

For some observers, there has never really been much of a contest in the Democrat gubernatorial primary since New York Attorney General Letitia James announced in December 2021 that she would exit the race for governor and focus instead on reelection to her current position. James is a formidable player in state politics who oversaw the preparation of the lengthy investigative report (pdf) into sexual harassment allegations that led to then-Governor Andrew Cuomo’s resignation in August 2021.

“I follow New York politics very closely, and I’ve believed for a long time that Kathy Hochul is just a runaway train of the Democratic primary,” David Carlucci, who served as a Democrat in the New York state Senate from 2011 through 2020, told The Epoch Times.

Hochul is a likely shoo-in for the nomination despite not having experience running for governor. The lieutenant governor stepped into her current role following the resignation of then-governor Cuomo in August 2021 in the midst of the sexual harassment scandal.

The low profile she has kept is not a function of her lack of means, observers say.

“Kathy Hochul definitely has the resources to reach out across the state, but it’s more of a ‘Rose Garden’ campaign—that old saying where if you’re far ahead in the lead, just keep doing what you’re doing,” Carlucci said.

Carlucci sees the incumbent governor’s relatively brief time in office as one marked by signal legislative accomplishments that have solidified her support within the party.

“I often advise candidates that the best campaign tactic is doing your job well, and Hochul has proven to do that time and time again in legislative sessions, passing what in other states would be hard [to bring off], such as new gun safety legislation and new protections on women’s rights to make health care decisions,” Carlucci said.

Hochul is conserving campaign resources for the general election in November, while drawing on reserves of goodwill and support cultivated over the course of her years as a lieutenant governor with a highly hands-on approach to getting to know constituents.

Over the course of his ten years in the state senate, Carlucci had extensive interactions with Hochul, and he said that today he recalls a strategy on the lieutenant governor’s part of intensive crisscrossing of the state and attendance of town hall meetings. Hochul was able both to cultivate the persona of a “homesy, folksy” type of populist while also developing a reputation as a shrewd politician, he said.

“You wouldn’t find Cuomo coming into a senior club meeting or town hall in your district, but Hochul as lieutenant governor did that on a daily basis, and that earned her credibility but also the experience of knowing [that constituency] inside out,” Carlucci said.

Given the reservoirs of goodwill and support she has built up, Hochul was in a strong position even before primary season began. Moreover, much of the concern at present over the rise in crime comes from non-Democrat voters who will not be casting ballots in Tuesday’s primary, Carlucci argued.

To other observers, Hochul’s decision largely to eschew visiting and intensive campaigning in New York City is a means of avoiding having to face up to some of the nastier consequences of criminal justice policies that have led to an overall 34.2 percent increase in crime in the city in April 2022 compared to the same period a year before, with serious crimes like robbery and burglary up by 41.5 percent and 39.4 percent respectively, according to NYPD figures.

“It would seem that she is confident that she will win the primary. Avoiding traditional campaign strategies and not visiting the five boroughs of New York City is probably to her benefit. She may feel visiting the boroughs will only draw more negativity and blame because of rising crime and violence that neither she nor Mayor Eric Adams has corrected,” said Michael Alcazar, a professor at John Jay College of Criminal Justice and former NYPD detective.

Policies favored by the state’s Democrat Party elites have definitely played their role in fueling the crime surge, Alcazar told The Epoch Times. During Adams’s recent visit to Albany, Democrat Party legislators reportedly rebuffed the mayor when he expressed concern over bail reform legislation that rules out cash bail for nonviolent offenders and has led to the release of criminals who have gone on to commit far more serious crimes, including the Feb. 14 murder of Chinatown resident Christina Lee by a man with an extensive record of petty crime, among many recent incidents.

But not all New Yorkers are aware of the role of bail reform in fostering the more dangerous environment in which they now live and work, he noted.

“All they know is that they’re living through a crime spree, and they want it resolved. Hochul is counting on this uninformed voting populace,” Alcazar said.

Given these realities, Alcazar believes, it is not hard to see why Hochul has largely avoided public appearances and debates in the city where these issues would be certain to come up and she would be likely to face tough questions about her and her party’s positions on criminal justice and public safety.

While Hochul seems likely to cruise to the nomination, Alcazar does not believe that what he sees as Democrat Party misrule can continue in the city and state indefinitely as crime continues to worsen.

“We seem to go through a vicious cycle of Democrat leaders and their strategies tearing down New York City, and inevitably a Republican will do the cleanup. We’ve already seen evidence of this in San Francisco,” he said, alluding to the June 7 recall election that led to the ousting of Chesa Boudin, a progressive district attorney widely associated with spiraling crime and a snowballing homelessness crisis in San Francisco.

“Citizens are fed up with failed policies. Blue states are crumbling and the evidence is undeniable. Their policies are a failed experiment under the guise of reform,” Alcazar said.