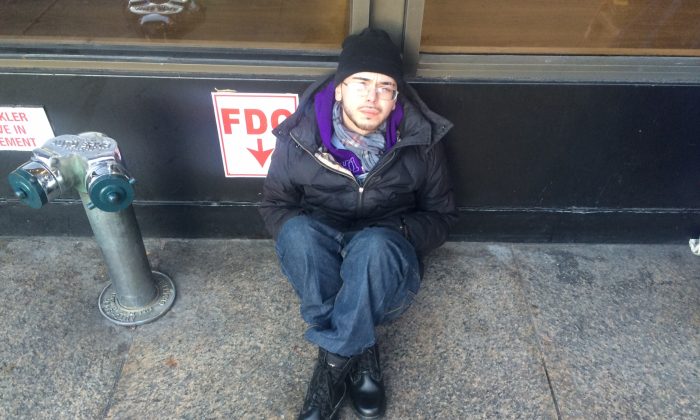 NEW YORK—New York winter weather can be brutal, especially for the homeless out in the streets.

On Jan. 3, Gov. Andrew Cuomo signed an executive order to move the homeless out of the cold and into shelters.

The order, which goes into effect on Tuesday, Jan. 5, enables authorities to force homeless individuals off the street and into shelters when temperatures reach 32 degrees Fahrenheit or below freezing.

On Tuesday, the day the order rolls out, temperatures are expected to fall below 25 degrees.

The mandate states that local governments, police agencies, and state agencies, including the New York State Police, take any necessary steps to identify and move homeless individuals to the appropriate sheltered facilities—by force if necessary.

What it means is that some homeless will be involuntarily dragged and placed into shelters with poor conditions they do not want to be in, according to homeless and organizations that work with them.

Further, organizations say this type of aggressive mandate may not actually help homeless New Yorkers and may instead push them farther away.

There are 57,838 homeless in the New York City Department of Homeless Services system, according to the Dec. 29 daily count. This doesn’t account for homeless who access this system.

While Gov. Cuomo’s mandate may seem to benefit the homeless, the reality is that many would rather face the cold on the streets than go back to shelters.

Anthony Gonsalez, 29, has been homeless for two years and was previously in a shelter for eight months. He says conditions in the shelter were atrocious:

“The reason I’m out here is because the shelter was so terrible. It wasn’t run down or anything, but it was poorly maintained, staff was bad, clients terrible. You don’t know who you’re sleeping next to. It’s a nightmare.”

“I don’t agree with Cuomo; he’s treating us like animals, like we are birds in a cage. I’d rather be in the freezing streets than back in the shelter,” he said.

When it gets colder, Gonsalez said he doesn’t know what he’s going to do. “You have to look for more options.”

Like Gonsalez, Sheila Turner has lived on the streets for 30 years and feels that what New York officials are doing is wrong.

“They’re hurting us. You want to take people, snatch them up, put them somewhere they don’t want to be, like an animal? Just because we can’t afford to pay rent? We’re not animals. We’re human beings,” Turner commented via an email in a statement from Picture the Homeless, a grassroots organization led by homeless people who work on civil rights, housing, and education issues.

Cuomo’s order directing police to forcefully move the homeless will only worsen the situation, said Turner.

“Now you’ve got trigger-happy police messing with us all the time, waking us up every five minutes so we’re walking around sleep-deprived, throwing away our possessions,” Turner said. “This executive order will just put more cops in our face, give them new ways to mess with us, and that won’t help the situation.”

Turned added that if the mayor and governor really wanted to help, they should put the homeless somewhere they can be safe.

Arnold Cohen, president and CEO of the Partnership for the Homeless, an organization that primarily provides emergency shelters, says the order from Cuomo may seem humanitarian, but it only serves to cover up the actual issue.

“The Governor should know by now that it won’t be effective. From the past, we’ve learned that aggressive outreach efforts will only push people to the outer ridges of the city, making them harder, if not impossible to reach,” Cohen commented via email. “At best, it’ll give us the illusion that the problem is under control.”

Given the undesirable conditions in shelters, they won’t coax the homeless in, even if it’s freezing in the streets, Cohen said.

“While the quality of shelters certainly plays a role in choosing to remain on the street, even smaller, friendlier shelters, which the city euphemistically calls ‘safe havens,’ won’t lure people in from the cold. In the end, a cockroach is a cockroach even if we call it a butterfly.”

Cohen said he is still waiting for the much repeated government housing assistance.

Mary Brosnahan, president and CEO of Coalition for the Homeless, an organization that provides a range of services, programs, and housing for homeless New Yorkers, says that the aggressive nature of Cuomo’s order is unethical.

“Despite the fact that his administration has started to backtrack on this claim, we have major concerns that the Governor’s order would forcibly move individuals against their will. Put simply, being homeless is not a crime.”

Brosnahan says the most effective action to take would be creating supportive housing in New York City.

“His order does nothing to provide for the long-term mental and physical health needs of our neighbors without homes. The single most important step the Governor can take to stem the suffering on our streets is to join with the Mayor to forge a fourth NY/NY Housing Agreement, creating 30,000 units of supportive housing in New York City and an additional 5,000 statewide.”