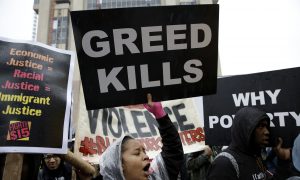 Fast Food Workers Strike for $15 Minimum Wage: 'We do too much'
0
Share Now
TelegramFacebookTweetEmailTellMeWeReddit
Copy Link 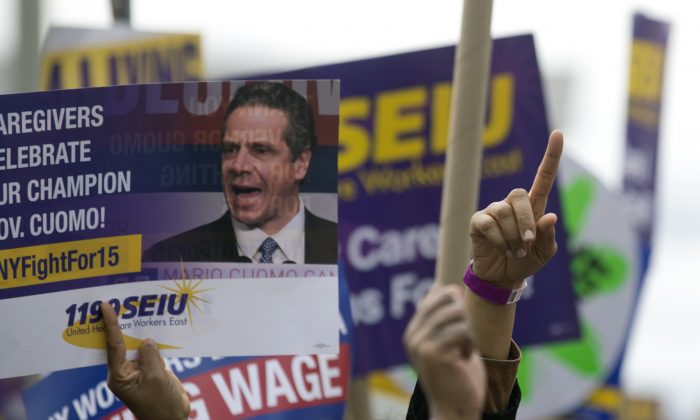 ALBANY, N.Y.—A proposal to raise New York’s minimum wage to $15 an hour will serve as a national model, Gov. Andrew Cuomo told thousands of rallying workers March 15, and act as an antidote to the economic insecurity in the state and around the country that he says is poisoning the nation’s political discourse.

The rally outside the Capitol comes as the Democratic governor’s proposal to gradually increase the wage from $9 to $15 faces a critical test in the state Legislature. The Assembly’s Democratic majority supports the plan, but the Republican leaders of the Senate warn of potentially dire effects on the economy.

While he never mentioned Donald Trump by name, Cuomo clearly referenced the Republican presidential front-runner when he said raising the wage would benefit millions of working families whose economic insecurity and fear is now being exploited by politicians who seek to capitalize on their anger.

Many among his audience had traveled to Albany from New York City on union buses. Cardinal Timothy Dolan offered a prayer before Cuomo spoke, telling the crowd “we need all the help that we can get, right?”

“We will consider a wage increase but it has to be based on hard evidence.”
— Senate Deputy Majority Leader John DeFrancisco

Cuomo’s proposal indeed faces challenges in the Legislature. The Senate’s Republican leaders are so far balking at the increase, saying detailed economic studies of the need for the increase and its potential effect on the economy must be completed first. Lawmakers expect to approve a budget by April 1.

“We will consider a wage increase but it has to be based on hard evidence,” Senate Deputy Majority Leader John DeFrancisco, R-Syracuse, told an evangelical convention meeting March 15 at the Capitol.

Business leaders predict the sharp wage increase will force business owners to raise prices, lay off workers and increase automation. In response, Cuomo proposes phasing in the increase by 2018 in New York City and by 2021 upstate to give businesses time to adjust. He’s also proposing $300 million in tax cuts for small businesses to help them absorb higher labor costs, an amount that critics say is far too low.

In response to Cuomo’s assertion that there’s no evidence the increase would hurt the economy, the Employment Policies Institute, a conservative economic think tank, took out a full page ad in a New York City tabloid calling Cuomo a “dunce.”

“There’s so much concern about what this would do to small businesses,” said Greg Biryla, executive director of the group Unshackle Upstate, one of 52 industry groups, local chambers of commerce and other organizations that have created a coalition to fight the increase.

The governor was hailed, however, by the workers who rallied at the Capitol.