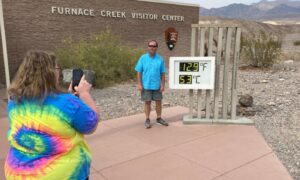 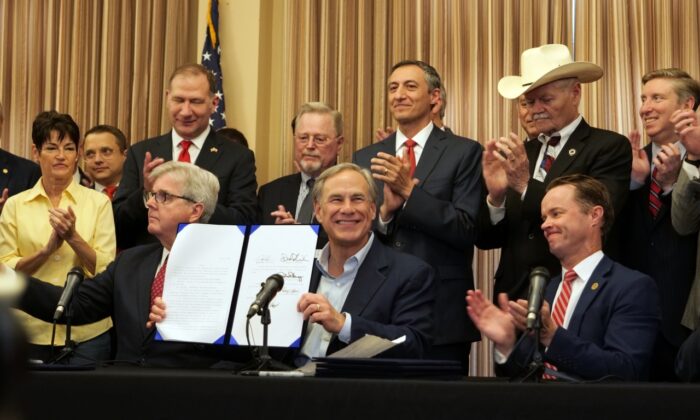 The governor appeared at Alamo Plaza in San Antonio for the bill signing ceremony and was joined by Lt. Gov. Dan Patrick, House Speaker Dade Phelan, and several other Republican lawmakers who authored and passed the legislation. Representatives of the National Rifle Association were also in attendance.

Abbott thanked the GOP lawmakers, noting that they had “built a complete barrier of gun rights in Texas” for law-abiding citizens.

The governor first signed House Bill 1927, otherwise known as the “constitutional carry legislation,” which he had officially signed into law the day prior.

From Sept. 1, law-abiding Texans aged 21 and over won’t have to obtain a state-issued license for carrying a handgun in public—either concealed or openly—so long they are not excluded from possessing a firearm by another federal or state law.

Abbott referred to the new law as “the biggest and best of them all.”

Previously, Texans who wanted to carry a pistol needed a state-issued license and were required to undergo training, a proficiency exam, and a background check, although background checks through the National Instant Criminal Background Check System will still be required when purchasing firearms in the state.

While supporters of the bill argue that it would “restore” Second Amendment rights by removing unconstitutional government barriers to carrying a handgun in many public places, critics assert that it could lead to an increase in gun accidents and violence.

Other bills that Abbott signed into law on Thursday, which also go into effect on Sept. 1, include House Bill 2622, also known as the “Sanctuary State Act.”

The bill prohibits state officials from enforcing certain federal regulations on firearms, firearm accessories, or ammunition that are not in line with state law. House Bill 1500 also classifies firearm and ammunition businesses as “essential,” meaning that government entities are prohibited from banning their sale or transport during emergencies and disasters, such as the COVID-19 pandemic.

Abbott also signed Senate Bill 19, which prohibits the state from contracting with any companies that “discriminate” against a firearm entity or firearm trade association, and Senate Bill 20 allows law-abiding Texans to store their guns and ammunition inside their hotel rooms when traveling, and carry a gun or ammunition directly from their vehicle to their room.

Meanwhile, House Bill 957 repeals the criminal offense of possessing, manufacturing, transporting, or repairing a firearm silencer. Gun rights groups have said that while people may associate silencers with the violence seen in Hollywood movies, they are actually used by gun owners to make shooting safer by reducing noise, recoil, and muzzle blast. The bill also ensures that any firearm suppressor manufactured in Texas, and that remains in Texas, will not be subject to federal law or federal regulation.

Finally, Senate Bill 550 removes the shoulder or belt holster requirements, allowing Texans to carry firearms in whatever kind of holster they choose.

“Politicians from the federal level to the local level have threatened to take guns from law-abiding citizens—but we will not let that happen in Texas,” Abbott said on Thursday. “Texas will always be the leader in defending the Second Amendment, which is why we built a barrier around gun rights this session.

“These seven laws will protect the rights of law-abiding citizens and ensure that Texas remains a bastion of freedom. Thank you to the Texas Legislature for getting these bills to my desk.”

The new legislation comes just days after two groups of underage teens killed one person and injured 13 others in a mass shooting in Austin.

The victim, whom police identified as Douglas John Kantor, 25, succumbed to his injuries at a hospital and was pronounced dead shortly after noon on Sunday, police said.

Abbott said he had visited Kantor’s family to express his condolences for their loss. They told him that that the incident was not a reason to eliminate Second Amendment rights in the United States.

“The family members are heartbroken about what happened. But the family members were adamant about two things: one, do not let this crime committed by teenagers be a reason to eliminate gun rights in the United States of America,” Abbott said.

“Second thing they told me is they were adamant also that they were against policies that defund police and our cities, like what happened in Austin, Texas.”