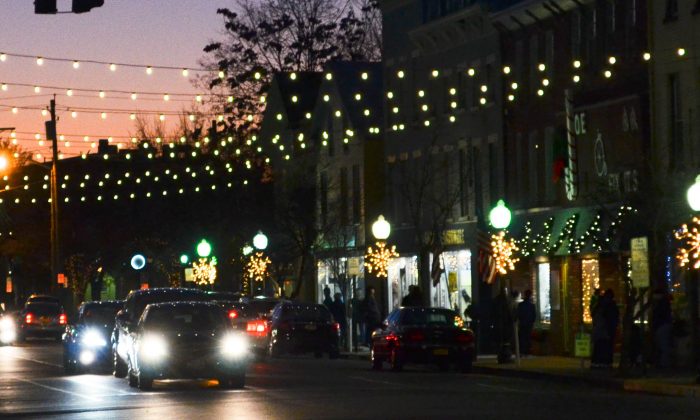 Goshen Tree Lighting Is All About the Kids

GOSHEN—In the clear and warm twilight of Dec. 5, residents of the Village of Goshen began to gather at the park near Main Street for the annual tree lighting.

A table managed by Goshen Girl Scout Troop 636 was accepting socks for their annual sock drive for the Middletown homeless shelter. Girl Scout Megan Bowen said the troop gathers the donations then delivers them to the shelter. “It benefits them a lot because they don’t have a lot of warm clothes and the socks really warm them up,” she said.

Children seemed to be totally in the holiday spirit and having fun in the semi-darkness.

High school student Tom Giordano plugged the charity “Pay Away the Layaway” which covers the cost of layaways for people at low income K-marts and Walmarts. “We pay it off for them—the whole thing.” Giordano said the charity was founded in 2011 by Lee Karchawer, a Goshen high school alumni.

Anticipation was building as Mayor Kyle Roddy took the mic at the memorial platform. Youngsters came closer as the mayor introduced Mark Olson of Cornerstone Theater Arts who read “T’was the Night Before Christmas.”

The Girl Scouts joined Olson in leading traditional carols. Then in the distance fire engines sounded the arrival of Merry Old St. Nick, who jumped off the last engine and joined little ones who gathered around him. One little boy appeared stunned. “Wow. Santa shook your hand,” his mother said to him.

Children seemed to be totally in the holiday spirit and having fun in the semi-darkness. Then with the mayor leading an exuberant countdown the holiday tree lit up followed a few minutes later by Illuminate Goshen lights strung across Main Street. Police Chief James Watt estimated the crowd at around 500.

Terry Small, executive director of the Goshen Chamber, urged the crowd to shop locally, especially under the lights of Illuminate Goshen. “For the first time in Goshen history we are going to illuminate downtown which is going to be a wonderful, wonderful new beginning for us.”

Roddy told the crowd that buildings do not make a community. “Every beautiful thing that we get to see in our community every day was built by individuals who volunteer their time.” He predicted 2016 would be a year of service. “There is so much we can do together.”