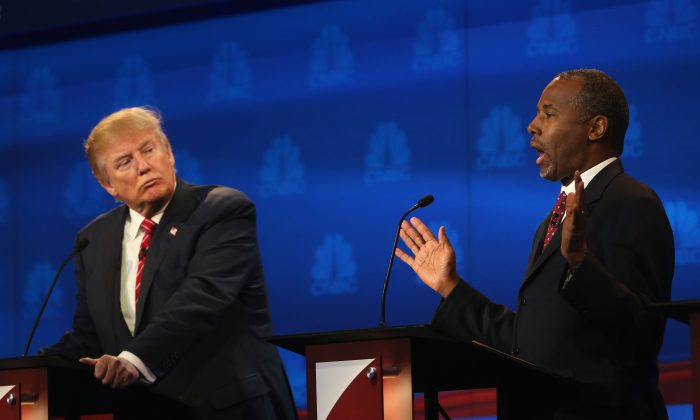 BOULDER, Colo.—Celebrity businessman Donald Trump was again center stage as the Republican presidential field gathered Wednesday night for the third debate of the 2016 campaign, but for the first time, the billionaire seemed reduced to the role of a supporting cast member.

An early rumble between former Florida Gov. Jeb Bush and Florida Sen. Marco Rubio showed they were willing to fight for the spotlight. Retired neurosurgeon Ben Carson, the leader in some recent preference polls, stuck to his soft-spoken style, while Texas Sen. Ted Cruz had some highlight moments — especially early on.

Here are a few takeaways from the two-hour matchup in the swing-state of Colorado.

Simmering tension between Bush and Rubio, who are vying for the same traditional Republican donors and supporters, spilled into plain view just 15 minutes into the debate. Bush seemed prepared to go after Rubio for missing votes in the Senate, but appeared ill-prepared for Rubio’s quick response — that he’s only attacking him because he’s behind.

“Marco, when you signed up for this, this was a six-year term and you should be showing up to work,” Bush said. “I mean, literally, the Senate. What is it, like a French work week? You get like three days where you have to show up? You can campaign, or just resign and let someone else take the job.”

But Rubio was ready with his reply, citing the percentage of votes missed by previous senators who ran for president, including President Barack Obama. The detail of his response showed he had been prepared for the attack — and that he knows it could be viewed as a liability.

“The only reason why you’re doing it now is because we’re running for the same position, and someone has convinced you that attacking me is going to help you,” Rubio said.

With the moderators focusing more on Bush, Rubio and some others, Trump seemed unusually quiet.

He was asked only a few questions by the moderators from CNBC and interjected himself into other questions far less than in the first debate, when he seemed in command of the debate stage. One of his longest responses was on his company’s bankruptcy record. His use of legal bankruptcy, he said, shows, “boy, am I good at solving debt problems.”

As has been the case on each of the crowded debate stages, some candidates — including Kentucky Sen. Rand Paul and New Jersey Gov. Chris Christie — seemed to disappear for long stretches of time.

That was also the case for former Arkansas Gov. Mike Huckabee, though he jokingly compared the bloated federal government to a runaway blimp making news Wednesday and later pointed out that he was wearing a Trump tie.

Cruz was a champion college debater and those skills were on display Wednesday. He deftly recapped the moderators’ quizzing of his opponents, describing those interactions as antagonistic.

“These questions illustrate why the American people don’t trust the media. This is not a cage match,” he said. The rebuke drew some of the loudest, most sustained applause of the evening. Cruz said the Republican debate is a stark contrast with the Democratic contest, “where every fawning question” was about “which one of you is more handsome and wise?”

Christie, Trump, Rubio and others joined in the media bashing. So, too, did Republican National Committee Chairman Reince Preibus, who told reporters the moment the debate ended that he was disappointed in both the debate’s moderators and CNBC.

Cruz, a freshman Texas senator who has made his name by defying his fellow senators, also had one of the most memorable quips of the night. Asked by moderators to describe his worst characteristic, as he would in a job interview, he said with a smile: “I’m too agreeable, easy-going.”

During the August debate, Carson meekly said at one point, “I wasn’t sure I was going to get to talk again.” This time, as the leader in some recent preference polls, the moderators showed that people are taking a closer look at his background and his policy proposals.

Carson said he’d like to have an across-the-board tax rate of 15 percent and get rid of all income tax deductions and loopholes if he were president.

He also was questioned about his involvement with a medical supplement company called Mannatech that has come under legal scrutiny. Although he appears in promotions for the company, he called it “absurd” to say he has a relationship with them. When a moderator pushed him about whether perhaps that showed he is weak on his “vetting process,” the crowd began to boo.

Carson smiled — spotting his chance to pile-on the media as other candidates had done. “They know,” he said of the audience.

Live Debate: Are China and the United States Destined to Be Enemies?

Sick of it All

Asked about his biggest weakness with the first question of the debate, Kasich dismissed it and began a tirade about the seriousness — or lack thereof — in the Republican campaign. “We are on the verge, perhaps, of picking someone who cannot do this job,” he said ominously, noting — without using their names — Carson’s proposal to end Medicaid and Trump’s talk about deporting all immigrants who are in the country illegally.

A few moments later, as Carson discussed his flat-tax proposal, Kasich piped back up: “This is the fantasy that I talked about in the beginning,” adding, “It’s not responsible.”

“We cannot elect someone who doesn’t know how to do the job,” he said.

Trump had a quick analysis of why Kasich’s tone had turned so negative: “His poll numbers tanked, and that’s why he’s on the end. And then he got nasty.”