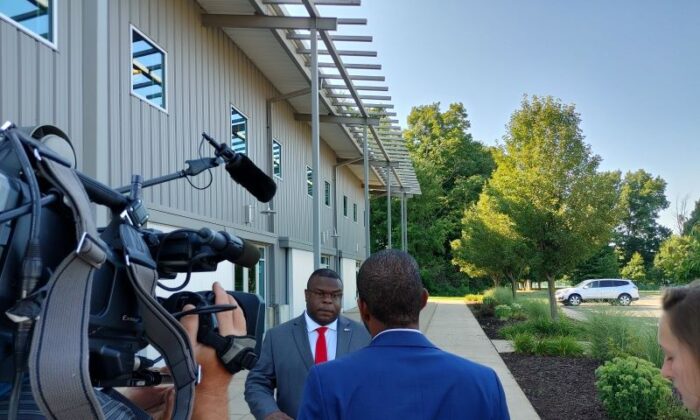 GOP Congressional Nomination on the Line in Western Michigan

In western Michigan, voters headed to the polls on Aug. 2 to determine if the 3rd Congressional District’s Republican nominee will be first-term Rep. Peter Meijer, who voted to impeach (former) president Donald Trump, or challenger John Gibbs, who is endorsed by Trump.

The winner will face Hillary Scholten in the general election on Nov. 8.

Scholten was unopposed in the Democratic primary.

Michigan’s 3rd District has a different look after newly drawn maps from redistricting. The district, which includes Grand Rapids, has not seen a Democratic congressional member since 1993.

With the new map, organizations like the Cook Political Report, Inside Elections, and Sabato’s Crystal Ball rate the general election as a toss-up.

Three days after he was sworn into the 117th Congress, Meijer was one of 10 House Republicans who voted to impeach Trump over the U.S. Capitol breach on Jan. 6, 2021.

Whether that looms large or did not deter Meijer’s chances for another term will be known when results are announced tonight.

Accompanied by his wife and other family members, Meijer cast his vote in the morning of Aug. 2.

Or he attempted to do so, at least.

With a contingent of TV cameras and reporters standing nearby, a poll worker stood with Meijer as he inserted his ballot into the machine. It kept getting returned, and the poll worker said there was a paper jam.

A few minutes later, poll workers resolved the problem. Meijer placed his ballot in the machine once again, and this time it was accepted. He smiled and high-fived an exasperated poll worker.

Moments later, Meijer and his family stood in front of reporters outside the precinct at Forest Hills Baptist Church in Grand Rapids.

“This is my first re-election and it’s in a new district,” Meijer said. “We feel confident that we will win today.

“It’s been a long road, and this is just the first step,” he added. “After today, we will have to win in the general election in a new district that leans Democrat.”

Meijer talked about the homes he has visited across the district while meeting voters face-to-face and admitted that some residents questioned his vote to impeach Trump.

“Some folks have said they didn’t like that vote, but they don’t want the seat go to a Democrat,” Meijer said. “And they said they have liked many of my other decisions.”

Meijer is “unelectable in November,” Gibbs believes, because the freshman legislator voted to impeach Trump and also “voted for the gun control bill.”

“Those are just two reasons why many Republicans would not support him in November,” Gibbs told The Epoch Times.

Standing outside a community center near his home in Byron Center, Gibbs talked to reporters before casting his vote.

“November is not about Democrats versus Republicans,” Gibbs said. “It’s about crazy versus normal, and I’m normal.”

Meijer has raised 10 times more money than Gibbs, andas of mid-July he has spent $2.1 million on the campaign compared to Gibbs’ $340,000.

Meijer was in the news on August 1 when he blamed the Democratic Congressional Campaign Committee for funding a $435,000 ad that appears to attack Gibbs, calling him “too conservative for west Michigan” and reminding viewers of his ties to Trump.

Critics of the ad buy, including Meijer, claim that it provided airtime for a campaign that has not had the money to elevate its name recognition on television in the Grand Rapids market.

Meijer wrote that it would seem like “the Democrats would look at John Gibbs and see the embodiment of what they say they most fear. That as patriots, they would use every tool at their disposal to defeat him and similar candidates that they’ve said are an existential threat. Instead, they are funding Gibbs.”

Gibbs told The Epoch Times that “he (Meijer) is making excuses and finding people to blame for when he loses.”

Gibbs was a U.S. Department of Housing and Urban Development (HUD) official during the Trump administration.

He was appointed by Trump to lead the Office of Personnel Management but was not confirmed by the U.S. Senate.

Trump also appointed Gibbs to the 1776 Commission, where he “fought Critical Race Theory and similar extremist ideologies by helping communities focus educational curricula on the founding documents and principles rather than divisive identity politics,” according to his website.

He spent seven years in Japan as a missionary and is fluent in Japanese, and he worked in Silicon Valley as a software engineer before his role with the housing department.

“I’m glad to have (former) president Trump’s endorsement, but I’m me. I’m John Gibbs, and I think people appreciate my story and my background,” Gibbs told The Epoch Times.

“I appeal to conservatives, independents, and even some Democrats, because we are all impacted by gas prices, inflation, and a cost of living that has escalated because of out-of-control spending in Congress,” he added.

Gibbs expressed confidence that he will win when results are announced and referenced an internal poll that showed “38 percent of Republican primary voters say there’s no chance they’d vote for Meijer in the general election, and 6 percent say they would rather vote for the Democratic candidate than Meijer.”

Impact Research released a poll in February stating that 60 percent of respondents said they would vote for Meijer’s opponent compared to 26 percent who reported they would back Meijer.

According to that survey, Meijer’s support plummeted to 21 percent when voters were informed about his vote to impeach Trump while Gibbs gained 52 percent backing.

The same Impact Research poll indicated that, in a Meijer-Gibbs matchup, Gibbs would get 37 percent compared to 19 percent for Meijer. At the time, 38 percent were undecided, and other contenders who were in the race then collected a combined 6 percent.

“I’m about to go in here and vote, and I think that all of the enthusiasm for our campaign shows we will win tonight,” Gibbs said before walking into the precinct.

Meijer and his supporters will gather at 8 p.m. for a watch party in Grand Rapids.

A watch party for Gibbs and his backers will be held in Byron Center.