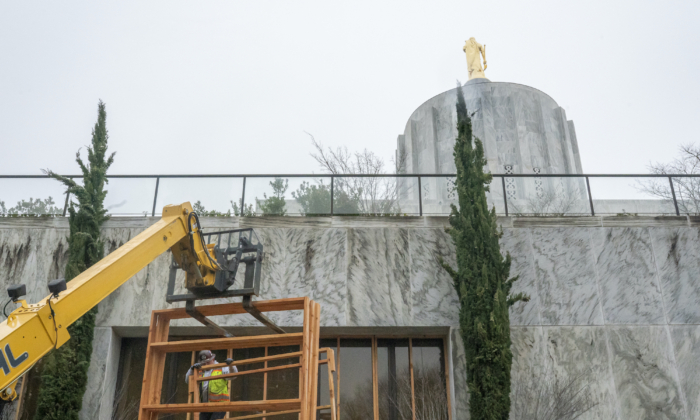 A Republican analyst says Democrats would have the advantage in five of six of Oregon’s congressional districts under a newly drawn redistricting plan which is already the subject of a lawsuit by the state’s Republicans.

But when the process began last summer, analysts had projected that redistricting would give the advantage to Democrats in four of the districts and Republicans in two.

“That handicap was based on voter distribution in the state and the results of previous statewide elections,” said political strategist Reagan Knopp.

Republicans routinely receive more than 40 percent of the vote in Oregon and its past three Democrat governors have garnered less than 52 percent, he said. President Joe Biden received 56 percent support in the 2020 presidential elections. But under the current map, Congressional representation could be 83 percent Democrat.

The outcome of the Oct. 11 suit could have implications for control of the U.S. House of Representatives in 2022.

Filed by former Oregon secretary of state Bev Clarno and three fellow plaintiffs, the suit argues the borders were drawn “to provide a more favorable Oregon congressional map for Democrats.”

For the first time in 40 years, Oregon gained a new seat in the House following the 2020 U.S. Census. State legislators began a contentious process—rife with walkouts and broken bargains—to create a new district that splits the state into six parts instead of its current five.

The majority-party Democrats began the process by creating a co-equal House Redistricting Committee that included three Democrat and three Republican members. This structure aimed to overcome the tendency for politicians to favor their own party when drawing redistricting maps.

It then passed in the House along party lines.

That map incorporated portions of the reliably Democrat city of Portland in four of the six districts, essentially diluting the influence of more Republican-leaning rural voters.

One of the districts crosses the Cascade Mountains to integrate voters from Portland’s left-leaning west side with those of the City of Bend—a rapidly growing liberal stronghold in the center of the state.

“The result of this highly partisan process is a clear, egregious partisan gerrymander, as has been widely acknowledged both in Oregon and across the country,” the lawsuit states.

“If the maps are allowed to stand, Oregon’s constitutional and statutory prohibitions against partisan gerrymandering are effectively meaningless.”

Under an Oregon law passed in 2013, the case will be heard by a panel of five retired judges—one from each of the state’s current five congressional districts. The panel will decide what evidence is admitted and who will testify. It has until Nov. 24 to rule.

“Oregon Democrats broke their word to their fellow legislators and then broke the law,” said Clarno.

“My hope is that the judges reviewing this case will uphold the law, say ‘no’ to gerrymandering, and say ‘yes’ to the fair representation Oregonians deserve.”

But the process to adjudicate the map is untried.

“Because we’ve never seen this new process play out before, we don’t know what to expect,” said Knopp.

“The courts don’t have a history of drawing new maps, but they have adjusted maps before. It’s a lot of new territory.”

Secretary of State Shemia Fagan, a Democrat who succeeded Clarno on Jan. 4, is the named defendant in her role as Oregon’s chief elections officer. She could not be reached for comment.

If either party appeals, the Oregon Supreme Court would have until Jan. 3, 2022, to affirm the existing map, or Feb. 7 to draw new boundaries.