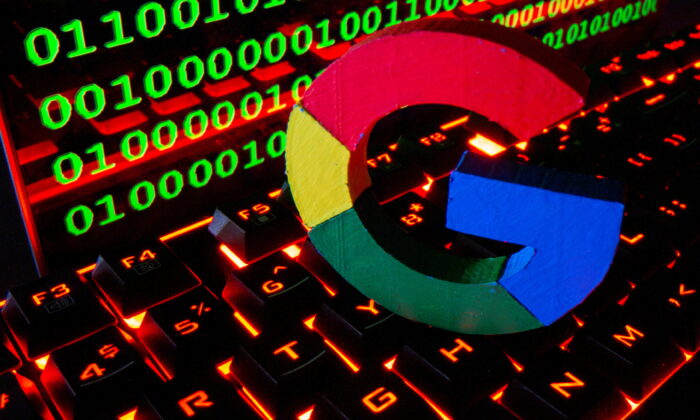 A 3D printed Google logo is pictured on a keyboard in front of binary code in this illustration taken Sept. 24, 2021. (Dado Ruvic/Reuters)
Media & Big Tech

BRUSSELS—Google’s plan to block a popular web tracking tool called “cookies” is anti-competitive, a group of advertisers, publishers, and tech companies said in a complaint to EU antitrust regulators.

The grievance could boost the European Commission’s investigation opened in June into Alphabet unit Google’s Privacy Sandbox which the company said could allow businesses to target clusters of consumers without identifying individuals.

Google said a year ago that it would ban some cookies in its Chrome browser to increase user privacy and offer the Privacy Sandbox as an alternative.

The Movement for an Open Web (MOW) said the proposal would give Google the power to decide what data can be shared on the web and with whom.

The Commission confirmed receipt of the complaint, saying it would assess it under the standard procedures. In June, it kicked off an investigation into Google’s online display advertising technology services.

Google declined to comment on the MOW complaint and referred to its previous statement released when it offered concessions to the UK competition watchdog, which described the Privacy Sandbox as an open initiative to provide strong privacy for users while also supporting publishers.

The group’s complaint to the UK regulator prompted its investigation which subsequently led Google to offer concessions.