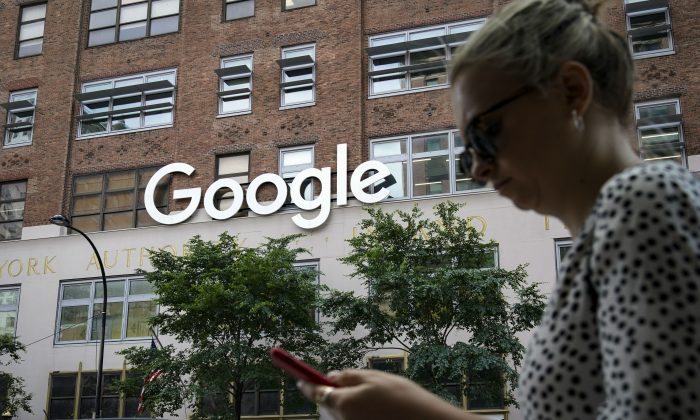 A researcher who has spent more than half a decade monitoring Google’s influence said he believes the tech giant will “actively interfere” in the 2020 elections. On Aug. 6, President Donald Trump said his administration is watching Google “very closely.”

Dr. Robert Epstein, a senior research psychologist at the American Institute for Behavioral Research and Technology, told The Epoch Times that Google has access to a number of powerful manipulation methods mostly through “ephemeral experiences” that can shift votes.

In his congressional testimony in July, Epstein noted that if all major technology companies came together to support the same candidate in 2020—which he said was likely—they could shift 15 million votes without leaving a paper trail. Epstein has discovered a dozen methods Google uses to manipulate public opinion or votes, including search engine manipulation effect and search suggestion effects.

Alphabet, the parent company of Google, donated $4.7 million to Democratic congressional candidates in 2018, according to FEC records. To Republican candidates, it donated $754,911.

In 2016, Epstein conducted a secret monitoring project that showed Google hid negative auto-complete search results for Hillary Clinton months before the election. His peer-reviewed research found Google’s algorithms can easily shift 20 percent or more of votes among voters and up to 80 percent in some demographic groups.

In a more recent study, Epstein analyzed Google’s “Go Vote” reminder on Election Day 2018 and found it gave the Democratic party between 800,000 and 4.6 million more votes than it gave Republicans. He used the same calculations Google’s data analysts performed before they added the prompt. Epstein characterized it as “vote manipulation,” not a public service.

Epstein, who considers himself a moderate who leans liberal, said his chief concern was Google’s power to not only suppress content but also determine the order it appears in—also known as filtering and ordering.

“These two processes put in the hands of a very small number of business executives are extremely dangerous to humanity,” he said. “They are a danger to democracy, they undermine a fair and free election.”

Conservatives have long decried what they described as unfair treatment from major technology companies. “Shadowbanning”—the surreptitious suppression of a user’s content by social media platforms, is also often pointed to.

Google’s manipulation tactics, Epstein said, are legal and save the company money when compared to using other methods of influence, such as donations.

“Google can do whatever they want,” he said. “In the U.S., there are no regulations, no laws restricting their ability to manipulate opinions or votes. By favoring one candidate or cause in search results or search suggestions, it costs Google—nothing.”

Google can still be fined. In March, the company was hit with its third antitrust penalty, a $1.7 billion fine by the European Union. In 2017, it was fined $2.7 billion for giving its own shopping service a more prominent placement than others.

What Google does with these methods is new and not like billboards or television advertisements, Epstein said.

“There’s no way to fight them, there’s no way to counteract them. They are not competitive. That’s a kind of power that has never existed before in human history. It’s perfectly legal for these companies to use these techniques,” he said. “It costs them little to nothing to use them, so of course they will.”

To prevent Google from interfering in the 2020 elections, Epstein said one solution would be to set up a large-scale monitoring system utilizing artificial intelligence to “catch these companies in the act.” He described Google as a “mind-control machine.”

U.S. authorities are considering the idea that the company has an antitrust issue. Google controls about 92 percent of the internet search market.

A Google spokesman, in response to reports of election interference, told The Epoch Times in a previous email that they “go to great lengths to build our products and enforce our policies in ways that don’t take political leanings into account.”