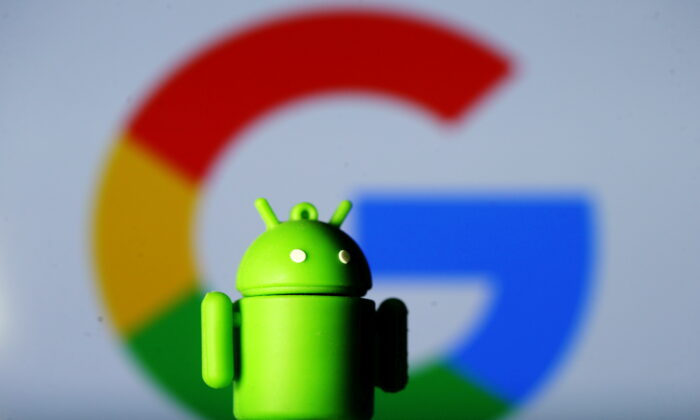 A 3D printed Android mascot Bugdroid is seen in front of a Google logo in this illustration taken July 9, 2017. (Dado Ruvic/Illustration/Reuters/File Photo)
Companies

LUXEMBOURG—A 4.34 billion euro ($5 billion) European Union antitrust fine was based on flawed calculations, Alphabet’s Google said on Thursday, urging Europe’s second-highest court to scrap or reduce what it said was not an appropriate penalty.

Google was fined for using its Android mobile operating system to thwart rivals and cement its dominance in general internet search from 2011, in the largest penalty meted out to any company found guilty of breaching EU antitrust rules.

“The fine that was imposed, a staggering 4.34 billion euros, was not appropriate,” Google’s lawyer Genevra Forwood told the five-judge panel of the General Court on the fourth day of a week-long hearing, which is taking place three years after the European Commission sanctioned the company.

Forwood said there was no anti-competitive intent in Google’s actions nor could it have known that its conduct was an abuse based on EU case law and there was no precedent for it.

“So it was wrong for the commission to impose any fine at all, let alone turn up the dials to reach its biggest fine ever,” Forwood said.

She also took issue with the EU competition enforcer adding an 11 percent gravity factor to Google’s fine compared with 5 percent for Intel in 2009 in a separate case.

“Even if this court considers that a fine is appropriate, it would only be proper to turn the dials right down,” she said.

However, the European Commission’s lawyer Anthony Dawes said Google “simply could not be unaware of the anti-competitive behavior of its practices”.

“Infringements committed negligently are no less serious than those committed intentionally,” Dawes said, adding that the fine was just 4.5 percent of Google’s revenue in 2017 versus a 10 percent cap allowed under EU rules.

A verdict is likely to come next year. The case is T-604/18 Google vs European Commission.