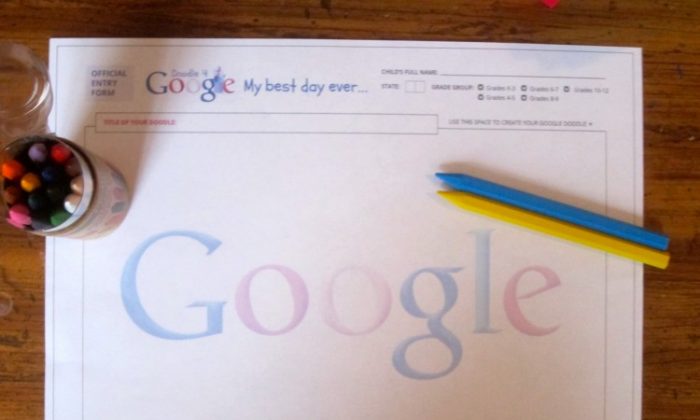 An entry form for the 2013 Google Doodle competition. Kids in K–12 are invited to draw what they think would be the best day ever. (Kelly Ni/The Epoch Times)
US

Google announced a contest for kids, called the Doodle 4 Google competition, on Jan. 14.

“Doodles are the fun, surprising, and sometimes spontaneous changes that are made to the Google logo,” and that appear on the Google homepage, according to the contest’s website. Google has displayed over 1,500 doodles on their homepages around the world in celebration of holidays, seasons, anniversaries, and the lives of famous people throughout history.

The contest is an invitation to students in grades K–12 to create their own doodle for Google. The 2013 theme is “My Best Day Ever.”

“We’re always thinking about ways to make everyday life a little easier and a little more fun. But what would the perfect day look like?” stated the Google blog in announcement of the 6th year of the annual competition.

The winning doodle will appear on the Google homepage for one day, and the designer will win a $30,000 college scholarship for themselves and a $50,000 technology grant for his or her school, according to the blog.

Among the judges for the competition are Katie Couric, journalist and television personality; Brian Henson, chairman of The Jim Henson Company; Kazu Kibuishi, author and illustrator of the “Amulet” graphic novel series; and Chris Sanders, writer and director of the movies “Lilo & Stitch” and “How to Train Your Dragon.”