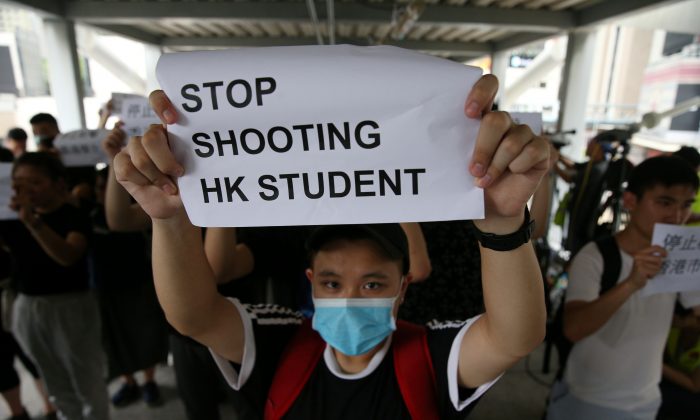 A protester holds a sign following a day of violence over an extradition bill that would allow people to be sent to mainland China for trial, in Hong Kong, on June 13, 2019. (Athit Perawongmetha/Reuters)
China

When following the latest developments of the Hong Kong protests against the extradition bill, some Chinese netizens found that if they use Google search to look for related reports, the top result is a website that defames the protests as “sabotaging Hong Kong,” and accuses protesters of “using violence to attack the police.” It also claims that anti-China foreign forces are taking advantage of the current situation to meddle in Hong Kong’s affairs.

In recent weeks, Hongkongers have staged mass protests against a bill that would allow the Chinese regime to seek extradition of criminal suspects. Opponents are worried that if the bill were to pass, Beijing could potentially pressure the Hong Kong government to hand over any Hong Kong citizens, as well as foreigners living or traveling in Hong Kong, to face trial in the Chinese regime’s courts under false accusations.

More than 1 million Hong Kong residents participated in a mass parade on June 9 to protest the controversial bill. Police used rubber bullets, bean bags, and tear gas  to disperse demonstrators on the following days with many demonstrators being injured. Outraged Hongkongers organized two more mass parades on June 16 and July 1 respectively, to protest the extradition bill and police brutality.

A reader in Hong Kong reported his unusual Google search result to the Hong Kong bureau of the Epoch Times on June 29. He tried to search “Epoch Times, Hong Kong” in Chinese characters on his mobile phone, but the top result was not an Epoch Times website, but a link that goes to www.jophk.com. The Chinese name of this site is “Hong Kong Justice Coalition,” and the content it reports is from pro-Beijing Hong Kong-based publications that criticize Hong Kong citizens for using violence against the police. It justifies the police brutality by claiming that their firing of rubber bullets and tear gas is only limited and reasonable use of force.

Epoch Times reporters tested the same Google search on both mobile phone and a computer. The same result showed up on mobile phone, but not on the computer.

When searching other newspapers in Hong Kong such as “Ming Pao Hong Kong” and “Oriental Daily Hong Kong,” the Epoch Times reporter found that the “Hong Kong Justice Coalition” website also appeared as the top search result, as a paid ad.

Epoch Times has learned that an organization has filed a complaint with Google, as even with paid ads, marketing companies should take social responsibility and business ethics into consideration.

Epoch Times reporter Luo Ya contributed to this report.