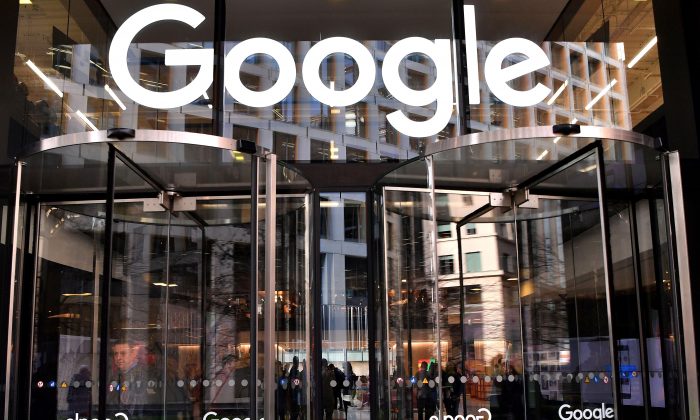 A logo is pictured above the entrance to the offices of Google in London on Jan. 18, 2019. (Ben Stansall/AFP/Getty Images)
Tech News

Google Achieves ‘Quantum Supremacy’ That Will Soon Break All Encryptions

Bitcoin plunged  by 15 percent as the tech world begins to realize that Google achieving “quantum supremacy” computing threatens all financial and military cyber-security.

TradingView data reported on Sept. 24 that Bitcoin crypto-currency on the Binance exchange crashed from $9,352.89 to about $7,800 in less than an hour trading, before closing at about $8,568. The loss of confidence follows the release of technical reports that “quantum supremacy” computing will soon be able to hack 256-bit encryptions that are invulnerable to traditional supercomputer brute force attacks.

Google’s efforts over the last decade to develop a ‘Super Intellect System’ focused on advancing artificial intelligence (AI), quantum computing and humanoid robotics. Many observers have referred to the effort as “Skynet,” from the 1984 movie: “The Terminator.”

Although a 53-qubit quantum computer can break any 53-bit cryptography in a few seconds, Bitcoin transactions are protected by 256-bit encryption. But Fortune reported that Google quantum computer qubits will double at least every two years to over 100 qubits by 2020, and then defeat all crypto-currencies in 2022 with over 400 qubits.

The Defense Information Systems Agency (DISA) disclosed in March that quantum computers will eventually expand their qubits into the 512, 1024 and 2048 range, rendering the highest levels of current U.S. military encryptions obsolete. DISA is relying on the Department of Defense’s ‘Other Transaction Authority’ to expedite issuing requests for whitepapers on potential cybersecurity encryption models that cannot be hacked by quantum computers.

Quantum computing leapfrogs the limitations of traditional computing where calculations are done one at a time with the two binary digits (bits) of “0” or “1” that turn on and off electronic current flowing through transistors. But quantum superposition subatomic particles can exist in two states at once, expanding the “entangled” digits into qubits.

IBM CIO Fletcher Previn speaking at the Baltimore AFCEA TechNet Cyber conference in March described the quantum computing challenge: “It’s a completely different approach to computing than counting, which is the basis of all current computing. It’s possible we’ve been programming computers the wrong way for the last X number of years. Quantum is a much closer approximation to how nature figures things out.”

Chinese leader Xi Jinping demanded the complete modernization of the People’s Liberation Army (PLA) by 2035 and China’s transition to a major military power by 2050. To support the effort, China’s 2019 military spending grew by 7.5 per cent. But its PLA dominated technological research budget grew by 13.4 percent, with special focus on integration of AI, quantum computing, humanoid robots.

It was assumed in early 2018 that China would be the first to achieve quantum supremacy after Chinese physicists claimed to set a quantum computing record by achieving 18-qubit entanglement, while still being able to control each qubit. But China has not made any comment regarding quantum computing since Google disclosed getting there first.

Demonstrating the accelerating speed of disruptive technical change, D-Wave—which provides exotic hardware to Google and other research organizations—announced on Sept. 24 that the company is offering a 2048-qubit quantum computer called the “D-Wave 2000Q” platform.