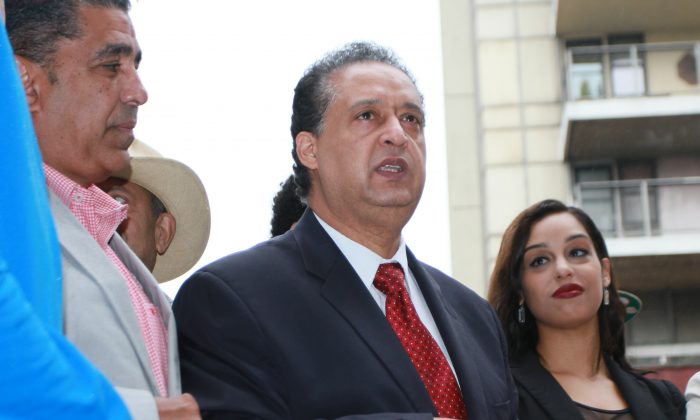 Sergio Consuerga, who protected a man from being beaten further by a group of bikers in what has come to be known as the Manhattan biker attack, speaks to reporters in the Manhattan borough of New York City on Oct. 6, 2013. (Ivan Pentchoukov/Epoch Times)
New York

NEW YORK—Sergio Consuerga, the good Samaritan who intervened in the vicious beating of a man in Washington Heights on Sunday, Sept. 29, used the wisdom he gained from martial arts to turn away the attackers.

Consuerga, a father of 10 and a longtime Washington Heights resident, was already late to church when a friend and a relative stopped him on the corner of West 178th Street and Amsterdam Avenue. What unfolded next has put him under the media spotlight since then.

As Consuerga chatted with his friend, a black Range Rover with a missing tire, driven by Alexian Lien, rolled into the intersection. The driver was unsure of where to turn. Consuerga saw Lien’s wife and child inside the vehicle and wondered if the family was looking for a place to fix their tire.

What he didn’t know was that the Range Rover had been involved in a highway incident with a gang of bikers and a subsequent car chase. Minutes earlier, a motorcyclist on West Side Highway had abruptly slowed down in front of Lien, causing a minor crash.

The Range Rover was then surrounded by dozens of motorcyclists who began to damage the car, according to a statement from Lien’s wife. Fearing for the safety of his family, Lien accelerated to escape and ran over Edwin Mieses, a biker, breaking both of his legs and his spine. Mieses may not be able to walk again, his family said.

At that moment on West 178th Street, all Consuegra knew was that a swarm of motorcycles had driven up to the Range Rover, which stopped behind another vehicle at a red light. Consuegra saw the bikers attacking the vehicle and started to make his way over.

“We saw one of them opening the door on the passenger side. He was trying to force the lady out of the car. He grabbed the lady with two hands and was pulling her out of the car,” Consuegra said. “But he couldn’t, I don’t know, somehow.”

Consuegra said the biker told the woman, “You’re going to get it also.”

“She had the baby in her arms. I guess she was protecting the baby from all the glass that was flying inside and outside,” Consuegra said. In a viral video posted on YouTube, a biker bashes the driver’s side window with a helmet and repeatedly hits Lien.

Women from nearby buildings began to scream, “No. Not the lady! There’s a baby!”

Consuerga decided to take a chance and stepped in. He saw one attacker let go of the woman in the car. He then went to the other side where he saw up to five bikers pulling Lien out, knocking the man down to the ground, and beating him with their helmets. “There was blood all over the place,” Consuegra said.

Consuegra said that he made up his mind not to confront the bikers, but to focus on protecting the family. Consuegra lived Washington Heights in the 1980s when the neighborhood was plagued by the crack cocaine epidemic. Joshua, a Washington Heights resident, described him as “just the kind of guy that would be able to step in and help.”

He stood between the victim and the bikers and spread out his hands. What followed surprised him. The bikers, Consuegra said, seemed stunned and immediately stopped. A biker stepped forward and said that one of their own had been run over. Consuegra decided to ignore him so as to keep the confrontation cool. He kept on saying, “That’s it guys. Let it go man. Let it go. That’s it.”

The bikers began to back away and left.

Consuegra was not the only one to step in to help Lien and his family. When the bikers began to disperse, women from nearby buildings brought water to wash the blood from Lien’s face. Lien got up momentarily in a daze. The people on the scene helped him back into the Range Rover before the ambulance arrived.

Consuegra said that his friend was there to hold off the bikers on the other side of Lien who was bleeding on the ground. This part of the account is confirmed by photos of the incident showing Consuegra and another man shielding Lien from a crowd of bikers.

Consuegra is trained in karate and martial arts. He said that his trainers always emphasized avoiding confrontation. He put that into practice when he decided to protect Lien from a further beating.

“I do not call myself a hero,” Consuegra said. “ I wish I could have done more.”