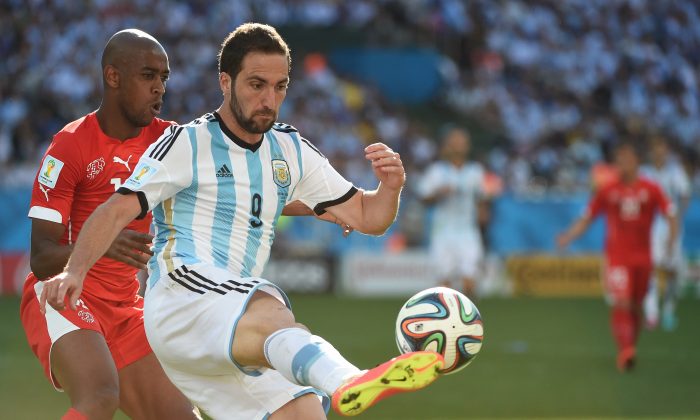 Switzerland's midfielder Gelson Fernandes (L) and Argentina's forward Gonzalo Higuain vie for the ball during the first half of extra-time in the Round of 16 football match between Argentina and Switzerland at the Corinthians Arena in Sao Paulo during the 2014 FIFA World Cup on July 1, 2014. (CHRISTOPHE SIMON/AFP/Getty Images)
Soccer

BRASILIA, Brazil—Argentina coach Alejandro Sabella insists that striker Gonzalo Higuain is doing a great job for the team, even though he hasn’t scored a single goal at the World Cup.

The 26-year-old Napoli player has been struggling to return to full fitness after an ankle injury in May, and has not impressed in Argentina’s four World Cup matches.

Playing at the center of a three-man attack, Higuain has often been outpaced and outsmarted by defenders in the tournament.

In the last match against Switzerland, he had just one clear scoring chance, a header that goalkeeper Diego Benaglio saved with his fingertips.

Still, Sabella said Friday that Higuain’s form is improving and that “we all have a lot of confidence in him because he is a great player who is doing a great job for the team. What’s missing is the goal-scoring.”

Argentina heads into its quarterfinal game against Belgium with only one forward, Lionel Messi, having scored goals so far at the World Cup.

Higuain scored 25 goals in 46 games for Napoli this season. But his last match before the World Cup was the Italian Cup final in May. Sabella said Higuain’s ankle injury meant he wasn’t 100 percent fit when the team started its campaign in Brazil.

But with Sergio Aguero injured, and Juventus striker Carlos Tevez excluded from the World Cup squad, Argentina has little choice but to keep Higuain in the lineup if Sabella sticks to his 4-3-3 formation.

“He is improving every day. In the last match he ran more than any other player. He sacrifices himself for the team,” Sabella said.

Last week Higuain said he was no longer feeling pain in his ankle and that he was gaining rhythm in training.

“All strikers need to score goals, but also help the team,” he said. “I’m staying calm. Hopefully the goal will arrive soon.”