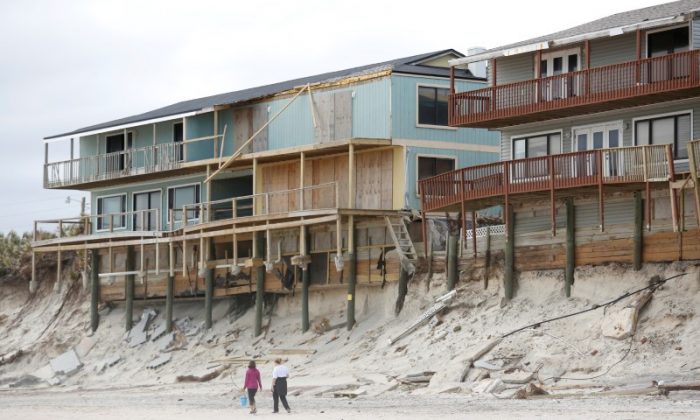 Beachgoers walk past condemned homes along heavily eroded shoreline at Vilando Beach, in the wake of Hurricane Irma and three nor'easters in the months since, north of St. Augustine, Florida, U.S., January 26, 2018. (Reuters/Gregg Newton)
US News

FLAGLER COUNTY, Fla—Down the palm tree-lined roads of northeast Florida’s Flagler County, a half-dozen dump trucks are shuttling back and forth along the Atlantic coast pouring thousands of tons of sand onto the local beach.

Replacing sand swept away by waves and wind is critical work to protect seaside homes and businesses as well as the tourism dollars brought by northerners seeking refuge from the cold in the Sunshine State.

Getting enough of it, for the right price and in time for the peak tourist season, has become much harder after a violent storm year that brought Irma, the most powerful hurricane to hit the state in over a decade, and saddled Florida with more than $50 billion in damage.

Costs of so-called beach renourishments are a fraction of the total, measured in hundreds of millions of dollars, but the effort is crucial for Florida’s $67 billion tourism industry. And while sand needs are surging, there is not enough to go around.

“It’s like the slow progression of tooth decay versus a fight where someone knocks out your teeth all at once,” Flagler County Administrator Craig Coffey said, referring to sand lost during Irma and Hurricane Matthew, which buffeted Florida’s coast in October 2016.

With the longest coastline of any mainland U.S. state, more money and time is spent fixing up Florida’s shores – widening and building dunes – than in any other state.

But after seven decades of rebuilding its beaches, the state is now struggling with sand shortages, rising costs and tight public funds even during calmer years. The quick succession of powerful storms makes the challenges even more daunting.

By one estimate, based on a sample of beaches, Irma knocked out four times the amount of sand Matthew displaced, U.S. Army Corps of Engineers spokesman John Campbell said. Matthew was already considered one of the worst storms in recent memory.

As weather patterns change and coastal development increases, more states have rolled out programs to counter beach erosion over the past five years.

Other nations, including Mexico, Britain and Australia, also regularly fix up their shores. High demand for sand in the construction industry further strains global supply.

As needs and costs rise in Florida, communities are increasingly competing both for sand and funding, with some retaining “sand lobbyists” to represent them in state and federal legislatures.

Flagler County tried for more than a decade to get the federal sand funds used for popular beaches like Miami before turning to local tax dollars, private money and emergency aid to rebuild dunes and protect neighborhoods flooded in Matthew, Irma and several nor’easters since. The estimated $26 million project began late last month.

That back-to-back strike of storms has pushed counties to reach for sand sources all at once, driving up prices.

South of Flagler, Brevard County wanted to expand a contract it awarded after Matthew to also cover post-Irma needs at the original price, but the contractor rejected the deal.

New bids came in 11 percent to 39 percent higher and the county settled for the lowest offer, said County Commissioner John Tobia, who wants some of the local tax money spent on sand to be used repairing the county’s damaged roads instead.

Brevard, home to Kennedy Space Center, also has to worry about sea turtles.

Federally-protected sea turtles nest along Florida’s east coast and the laws prohibit any work during the nesting period from May through October.

Environmental rules also prescribe what type of sand can be used, since its color affects the temperature – the darker, the faster it warms – and that in turn can change the gender of the turtles before hatching.

As useable offshore sand sources get depleted and tapping into new sites involves lengthy permitting, more local governments are trucking sand from mines – instead of dredging it from the seabed and piping it onshore – even though it can cost five times more per cubic yard.

“With the shrinking sand supply, it leads to conflict,” said Dave Bullock, who retired last month as town manager for Florida’s western barrier island of Longboat Key, which used up the rest of its offshore reserves after Matthew.

In a recent example of that clash, two neighboring beach communities, Siesta Key and Lido Key are facing off in a lawsuit over which can claim 1.8 million tons of sand from a common boating channel.

Environmental advocates argue that beach erosion is primarily a natural phenomenon and efforts to reverse it create a vicious-circle by encouraging building along the shore.

That in turn puts more people and public resources at risk and calls for greater efforts and money to protect them.

The long-term, lasting solution would be to roll back coastal development, environmental activists argue.

Still, needs are likely to grow, says Derek Brockbank, executive director at the American Shore and Beach Preservation Association, which lobbies for coastal governments and businesses.

Climate change and coastal development have created an urgent need to protect the upland, Brockbank said, calling for $5 billion to be set aside over the next decade in any upcoming federal infrastructure bill.