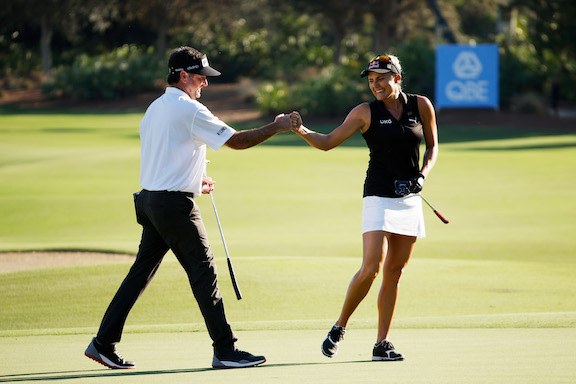 The team of fellow Aussies Marc Leishman and Jason Day took the first-round lead at the QBE Shootout at Tiburon Golf Course in Naples, Fla., with a score of 56, 16-under, in the scramble format for the Friday. The event began on Dec. 10th with a total purse of 3.6 million.

Leishman/Day were one shot shy of tying the event record low making 12 birdies, and two eagles, without any bogeys. The eagles came from Leishman twice holing out without putting, on the par-5 6th, and the par-4 10th holes.

“The one on six, I had a pretty good read off (Day),” Leishman said. “It was a very straightforward chip, but obviously it still takes a little bit of luck for it to actually go in the hole. And then the one on 10, the guys all hitting in front of me, it was on a little knoll I guess you’ll call it. (Day) was in there about 10 feet and had a chance to just go straight at it and went straight at it.”

The competition’s 12 teams all shot 62 or lower; with the record for the scramble format of 55. Among those who hold the record are Day/Cameron Tringale.

With the scramble format, players pick their team’s best shot, and each plays a shot from that spot.

Second on the leaderboard are two teams; consisting of Graeme McDowell of Northern Ireland and Canadian Corey Conners, and the defending champion team of Americans Matt Kuchar and Harris English.

Tied for fourth place consist of LPGA competitor Lexi Thompson and partner Bubba Watson. Thompson/Watson had an eagle and 11 birdies for a total 13-under 59. They are tied for fourth with Kevin Na and Jason Kokrak.

“It was an amazing day,” Thompson said. “I made a few birdies on the front and then he (Watson) came through on the back, hitting on the drivable hole to about 10 feet and then making a two on his own ball. That’s all great with scramble and just working as a team. It was just a lot of fun. I enjoyed watching him play for the first time in person, so I’m looking forward to the next two days with him.”

Thompson’s success and comfort level stems from her experience playing the course in LPGA events, as well as residing on the Atlantic coast of south Florida approximately 1.5 hours away.

Watson was involved as an assistant on the U.S. Women’s Solheim Cup Team earlier this year where Thompson participated as one of the top Americans; unfortunately, the United States lost to Europe on American soil at Inverness Club in Toledo, Ohio.

These off-season events are more relaxed as there are no points or qualifications for other events. Some players take their families along for vacations.

The second round format on Saturday will be modified alternate shot, where both players tee off and then alternate shots from there on.

Sunday’s final round format will be traditional fourballs.

The first official PGA Tour event will be in Maui at the Plantation Course at Kapalua, Sentry Tournament of Champions from Jan. 5–9.

The LPGA will kick-off Jan. 20–23 at the Hilton Grand Vacations Tournament of Champions in Orlando, Florida.