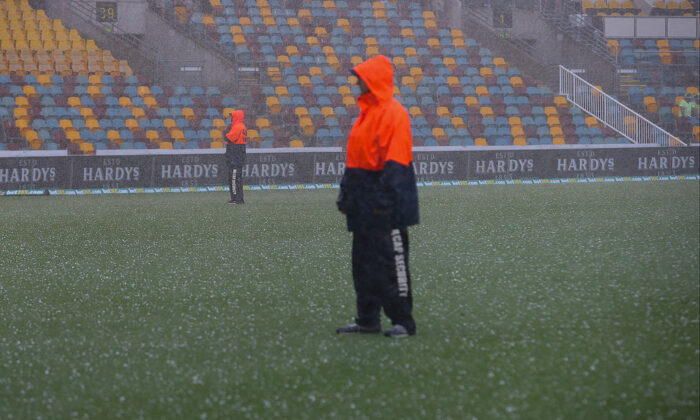 Security staff stand on the playing field following a hailstorm on day four of the first Ashes cricket Test match between England and Australia at the Gabba Cricket Ground in Brisbane on November 24, 2013.(PATRICK HAMILTON/AFP via Getty Images)
Australia

Queensland has been hit with golf ball-sized hailstones as dangerous supercell thunderstorms move across the state’s southeast.

Severe thunderstorms are forecast to rapidly develop along the Great Dividing Range throughout the afternoon of Oct 31 and push towards the coast.

Hail fell at Gatton and Adare, west of Brisbane, the Bureau of Meteorology said, and damaging winds and torrential rain that could lead to flash flooding were also likely.

“Very dangerous thunderstorms … supercell thunderstorms that could lead to giant hail and destructive wind gusts in excess of 125km/h.”

The forecast comes less than a week after two days of storms delivered a month worth of rain and flash flooding to some parts of the state, including Brisbane.

Tennis ball-sized hailstones pummelled the region on Tuesday and Wednesday.

Beachmere, near Caboolture, recorded 80mm of rain in an hour and 70mm fell on the Upper Lockyer, west of Brisbane.

Tiaro, north of the Sunshine Coast, recorded 51mm of rain in an hour, with 22mm of it falling in five minutes.

Flash flooding affected some Brisbane areas at the height of the storms on Tuesday, which was the wettest October day in the city since 2010.