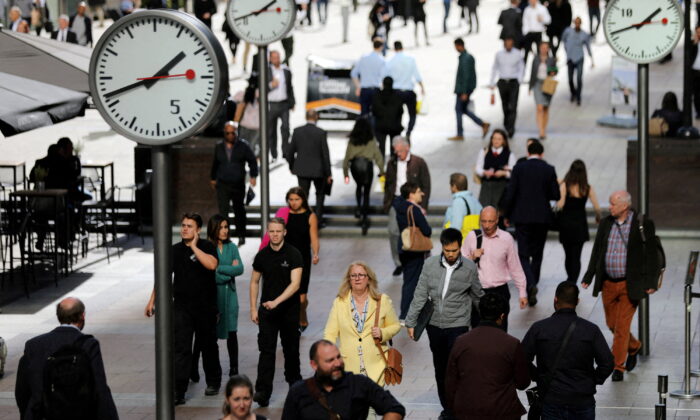 LONDON/HONG KONG—Inflation in Britain could exceed 20 percent early next year if spiraling gas prices fail to come down, economists from U.S. investment bank Goldman Sachs warned, adding that a recession was on the way.

Last week Britain’s energy regulator said power bills will jump 80 percent to an average of 3,549 pounds ($4,188) a year from October, plunging millions of households into fuel poverty and leaving businesses at risk unless the government steps in.

“In a scenario where gas prices remain elevated at current levels, we would expect the price cap to increase by over 80% in January (vs 19% assumed in our baseline),” Goldman economists said in a research note.

“(This) would imply headline inflation peaking at 22.4%, well above our baseline forecast of 14.8%.”

Last week economists from Citi said consumer price inflation was set to peak at 18.6 percent in January, more than nine times the Bank of England’s target.

Goldman said it expected a recession to begin in the fourth quarter, with the economy set to contract by 0.6 percent in 2023 as a whole—gloomier than the Reuters poll consensus for growth of 0.2 percent but less severe than the 1.5 percent drop predicted earlier this month by the Bank of England.

The BoE looks set to raise interest rates by 50 basis points to 2.25 percent next month, Goldman said, adding that it saw upside risks to its forecasts for additional 25 basis-point hikes in following policy meetings.