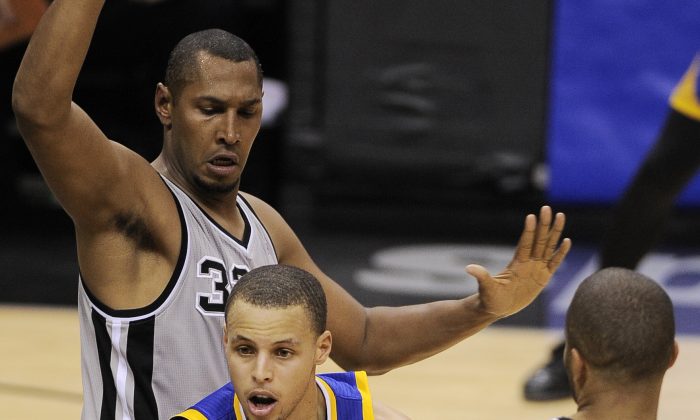 SAN ANTONIO — Stephen Curry was virtually unstoppable in helping the Warriors build a big lead. Unfortunately for Golden State, Manu Ginobili and the San Antonio Spurs proved just as overwhelming down the stretch.

Ginobili’s 3-pointer from the wing with 1.2 seconds left in double overtime lifted the San Antonio Spurs to a thrilling 129-127 victory Monday night over the Golden State Warriors and Curry, who had 44 points in the opener of the Western Conference semifinals.

“We had a heartbreaker in Game 1 of the last series (against Denver),” Curry said. “A last-second layup by Andre Miller. So we’ve been here before. But we know how to come back. We’ve been a resilient team all year. To have an opportunity to go 1-1, we still have a chance to do that.”

“It’s tough to shoot over him,” Curry said. “You have to create space. They did a good job; they drew a charge one time. I could go by Kawhi but they had help waiting on the back side. I’ll look at the film and see what (Leonard) did well late in that game to disrupt our timing and my rhythm.”

Ginobili’s game-winning shot came 43.7 seconds after he took an ill-advised 3 that appeared to cost the Spurs the game.

“I went from wanting to trade him on the spot to wanting to cook breakfast for him tomorrow morning,” Popovich said. “That’s the truth. When I talk to him and say, ‘Manu,’ he goes, ‘This is what I do.’ That’s what he’s going to tell me. I stopped coaching him a long time ago.”

Ginobili’s 3 capped an improbable comeback for the Spurs, who trailed by 16 points with 4 minutes left in regulation before going on an 18-2 run to close the fourth quarter and force overtime.

Golden State trailed by five with 1 minute left in the second overtime before the Warriors scored six straight points to take a one-point lead on Kent Bazemore’s reverse layup that gave the Warriors a 127-126 advantage with 3.9 seconds left. Brazemore’s layup was set up by Ginobili’s errant 27-foot 3-pointer with 44.9 seconds left.

“I took a really bad shot,” Ginobili said. “I was on the top of the key. I had no chance whatsoever to make it to the basket. I couldn’t penetrate; I was very tired. Jack gave me a couple of feet and I thought I could make it.”

Trailing 127-126 with 3.9 seconds left in the second overtime, Ginobili launched a high 3-pointer off a cross-court inbounds pass from Leonard.

“On the last play, it wasn’t for me; they just left me open,” Ginobili said. “I set a screen for TP and they both went with him and left me open on the weak side. When I caught it I just saw Bazemore flying. I just gave it a lot of air and it went in.

“I wasn’t even an option. They told me just go screen and stay far from the play. The play was for Tony or Boris. And they got confused.”

Golden State had one final chance but Jarrett Jack’s 3-pointer from the top of the key was off.

Tim Duncan finished with 19 points and 11 rebounds in 35 minutes. Duncan, who is battling a stomach bug, left the game with 3 minutes left in regulation and only played the final seconds of each overtime.

“He’s had the flu,” Popovich said. “He’s been sick and he gave it a shot. It became pretty apparent there that he wasn’t going to tell me the truth anymore, so I had to pull the plug myself.”

Klay Thompson and Harrison Barnes each added 19 points, Jarrett Jack had 15 and Andrew Bogut had 10 points and 15 rebounds.

The Warriors missed eight of their final nine shots in regulation, including a desperation heave by Curry at the buzzer against several defenders.

“You should (win),” Golden State coach Mark Jackson said. “We’re not the first team to lose a game like this and we will not be the last. That doesn’t mean we’re going to accept it. We’re going to get better. Even down the stretch in the process of losing the lead, we did some things that were good. At the end of the day, they made plays and we didn’t make enough.”

NOTES: Spurs F Tiago Splitter (ankle) missed his second-straight game of the playoffs. Splitter did not miss any games during the regular season due to injury, but sat out the finale to rest. … San Antonio G Nando De Colo was inactive. . Warriors W Brandon Rush (knee) missed the game. … Barnes was 5-years-old the last time Golden State won in San Antonio. … The national anthem was sung by Haley Scarnato, a former American Idol finalist and San Antonio native.