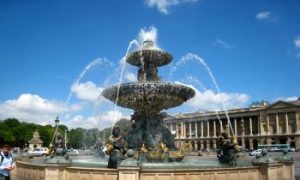 New Yorkers in Paris, Part 1: A Stroll Along the Seine
0
Entertainment

By Jane Andrews
Print
The Golden Globe Winners for 2011 were announced Sunday, Jan. 16, at the Beverly Hilton Hotel in a night of glitz and glamor.

The 68th Annual Golden Globe Awards were hosted by British comedian Ricky Gervais for the second successive year. Helping to hand out the awards were Robert Pattinson, Scarlett Johansson, and Sandra Bullock.

The awards include 25 categories—14 for movies and 11 for small screen TV.

Best Motion Picture—Drama was won by The Social Network, winning out against Black Swan, The Fighter, Inception and The King’s Speech.

Natalie Portman won Best Actress Motion Picture Drama for Black Swan for her performance as a ballerina on a downward spiral.

Colin Firth won Best Actor in Motion Picture—Drama for the critically-acclaimed film The King’s Speech. The movie is based on the true story of King George VI's quest to overcome his stutter.

In the Best Motion Picture—Comedy or Musical category, The Kids Are All Right came up trumps, with Best Actress and Best Actor in that category going to Annette Bening, also from The Kids Are Right and Paul Giamatti, Barney's Version.

Details of all the winners and original nominees are listed here on the official website of the Annual Golden Globe Awards.