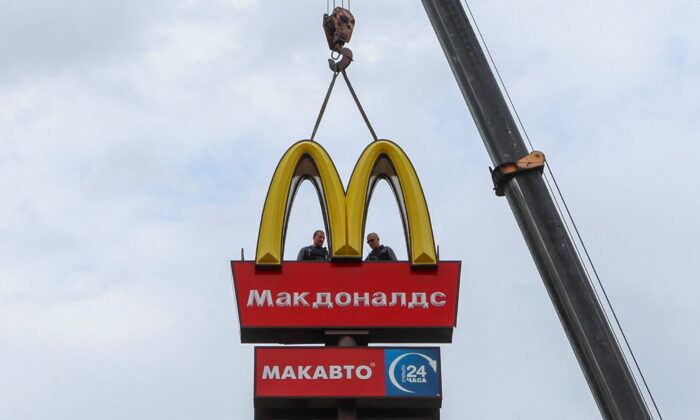 Workers use a crane to dismantle the McDonald's logo and signage from a drive-through restaurant of McDonald's in the town of Kingisepp, Russia, on June 8, 2022. (Anton Vaganov/Reuters)
Europe

A hamburger and two potato fries will feature on the new logo at former McDonald’s restaurants in Russia, the local company said, as it unveiled an advertising campaign ahead of its official reopening on Sunday.

After more than three decades in Russia, McDonald’s Corp. in May said it was selling its restaurants in Russia to one of its local licensees, which will rebrand them under a new name that has yet to be disclosed.

“The logo’s green background symbolizes the quality of products and service that guests are used to.”

McDonald’s Russia’s new owner Alexander Govor aims to reopen all restaurants in two months and to expand to 1,000 locations from around 850 now.

According to Russia’s anti-monopoly service, which approved the takeover, McDonald’s, whose symbol is a giant M, known as the Golden Arches, retains the right to buy its Russia restaurants back within 15 years.